Heroes Wiki
Register
Don't have an account?
Sign In
Advertisement
in: Articles under construction, Article stubs, Animals,
and 27 more

Cross the Sahara desert to save Eva (succeeded).

Ajar is the main protagonist of the animated film Sahara. He is voiced by Robert Naylor.

A young 20-year-old snake, Ajar is a bit of the "ugly duckling" of his family and the target of his clan's mockery. Indeed, despite his age, the young cobra has still not moulted. Courageous and idealistic, he dreams of proving to others his true value.

Ajar is seen in basket trying to steal a watermelon which he does successfully. While Ajar and his buddy Pitt try to enjoy their melon he bullied by Saladin who eventually knocks him out with rock and steals the melon. While in the sandstone cliffs Ajar is teased for being young and small, as he hasn't shed to his adult skin yet. Tried of being brutalized by their community Ajar proposes to fleeing to the Oasis, but Pitt points out the Oasis belongs to green snakes. When he spots Eva who trying to leave the Oasis but is captured by the Secretary Birds he is love struck and is not discouraged.

Meanwhile, Ajar is painting himself green, and sneaks into the Oasis despite Pitt's complaints where they find his disguise has worked against one of the guards. After entering, it isn't long before the Secretary Birds warn of intruders ("Dusties") and the friends dart for the grass thinking it's them. They separate, and Ajar finds an unfamiliar brown snake who happens to be Eva in disguise as a Dusty, who asks for his help. They get stuck at the edge of a cliff against one of the guard birds, and Eva leaps off the cliff with Ajar. Ajar, however, can't swim, and almost drowned before being given CPR/air by Eva, which he takes for a kiss. Their disguises begin to wash away in the water, and they lose the secretary birds overhead by hiding in a river cave. They have conversation and make truce and invites him to go with her but just as Eva heads out of the cave, she is taken by Omar, a cruel snake charmer and skinner.

Ajar certainly displays these traits as he’s devoted to being reunited with his love despite constant discouragement and is found very loyal to Pitt during his journey.

Eva is saving Ajar from drowning. 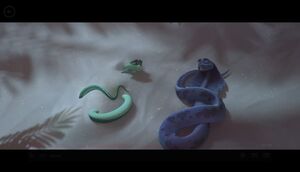