Assisting Arkantos in his goals.

Protecting his friends.
Beheading his foes.

Assist Arkantos on his adventure.
Evacuate the Atlantean citizens.
Assist Kastor in killing the Titans and defeating the servant of Kronos.
(all succeeded)

Ajax is the deuteragonist of the video game Age of Mythology. He appears as a playable character in the Fall of the Trident campaign along with its sequel The New Atlantis. He is regarded as Arkantos’s best friend, who assisted in winning the Trojan War, and accompanies Arkantos in his journey to help stop Gargarensis.

He is voiced by the late Charles Rocket.

Ajax makes his first appearance when Arkantos arrives to help Greece in the Trojan War. Arkantos remarks that he is surprised to see him alive, suggesting that they have been long-term acquaintances. As they have been struggling to resist the Trojan attacks, they initiate their plan to change that by destroying two Trojan docks to weaken their naval strength. Ajax takes his army to a camp and waits for Arkantos and Odysseus to take down the main gate, but is ambushed by Trojans, forcing Arkantos to rescue him. They counter-attack by taking down the adjacent enemy base, and then learn that Agamemnon’s camp was subsequently attacked.

Arkantos suggests changing their tactics, and they build a giant wooden horse to sneak behind the gates, expecting that Troy will take it. Ajax, along with Arkantos and Odysseus, are the three who volunteer to garrison in the horse, and they succeed in their plan. At nightfall, they quietly take out the guards and hijack siege weapons to take down the gate from the inside. Afterwards, Agamemnon rushes his army inside and rescues Helen, and Troy is defeated.

When Arkantos prepares to sail home, he finds his ships have degraded. Ajax takes him to Ioklos to them repaired, but finds the city in rubble. An old man informs them that bandits have invaded the city, having taken their citizens hostage. When they retake control of the city, they meet the centaur Chiron, who joins the duo on their journey to rescue the remaining prisoners. As they head north, they split up to investigate, and find many fortifications along the way. The remaining prisoners are found digging a passage into the underworld under the orders of Gargarensis, who rains a meteor shower on the heroes and heads through the passage.

In Erebus, they find a giant gate along with a ram to open it, built by Gargarensis. They call for reinforcements and battle the monsters of the underworld, and succeed in destroying the ram. Gargarensis escapes and an earthquake knocks boulders in front of the way they came in, forcing them to find another way out. They encounter Shades, who assist the trio in finding the way out as they continue to battle the underworld beasts. Eventually, they reach temples to the gods, and Arkantos prays for help, which forms a flight of stairs, leading them out safely.

Ajax, Arkantos and Chiron find themselves in a desert. They are approached by Amanra, a Nubian mercenary who is protecting an excavation site from her enemies. Ajax is initially uninterested in helping, but reluctantly agrees to help when Arkantos orders his men to assist in protecting the site. They retrieve a relic from the site: the sword of the Guardian, and escort Amanra’s men to her target. On the way, they rescue Egyptian slaves, who lead the heroes to their village, and agree to help bring the sword to the Guardian. Kemsyt, the bandit warlord, has a fortification built around the Guardian while his army is away, and the heroes break through to revive the Guardian to defeat said army. They find a box containing a piece of the god Osiris, and Amanra explains that Osiris has been split into four pieces and scattered across Egypt.

After a fierce tug of war over the first Osiris piece, getting captured and locked up, and recapturing the piece once more, they take a break in a valley. The next day, the heroes must split up to capture the remaining three before any are destroyed. Ajax accompanies Arkantos to seize the piece within Kamos’s possession. They rescue some Greek slaves, steal pirate ships and ally themselves with refugees. With their force built up, they storm Kamos’s base, and Ajax allows Arkantos to have a personal confrontation with the pirate leader himself and kill him. They bring the Osiris piece to his pyramid, along with Amanra’s and Chiron’s, and he is revived. Osiris decimates Gargarensis’ army easily, preventing him from reaching the underworld, but escapes to the Norselands.

While sailing north, Ajax notices a shipwreck that belonged to Odysseus on an island. He and Arkantos stop there, and are turned into boars by the sorceress Circe. They find pigs who are revealed to be Odysseus’s men and met a similar fate, and go on a journey to rescuing the remainders, whilst protecting from villagers. They find a temple to Zeus and are transformed back into their human form. As Odysseus is still missing, they train an army and siege Circe’s fortress where he is found, and rescue him. He thanks Arkantos and Ajax and sails home.

In the Norselands, Ajax is initially not present when Arkantos and Amanra fall into Gargarensis’ avalanche trap. He reunites with them on their journey into Midgard, where they assist the dwarven brothers Eitri and Brokk in helping to recapture their forge from giants. In Midgard, they meet an old man named Skult, who gives them a flag he claims will help with getting Norse clans on their side. They battle through a canyon of giants and attempt to show the flag to three fighting Norse clans. Instead, they become enraged and turn hostile against the heroes, but later join the heroes before Skult vanishes.

They are approached by Reginleif, a Valkyrie who explains the reason they were attacked, and proceed to rally more Norse clans by assisting them against monsters harassing their villages. With their new army, they attack Gargarensis’ base head on, and find that he has already reached the underworld through the Well of Urd. Gargarensis is already sieging the gate. They attempt to stop him, but they are outnumbered and are forced to retreat, where Chiron sacrifices himself to block the enemies’ path.

As all hope seemed lost, they find Brokk who is rebuilding Thor’s broken hammer; his previous one was destroyed by Loki. They manage to barely succeed in rebuilding it, and Thor uses his powers to seal the gate within seconds of it opening. When sent back to the surface, they set up fortifications and prepare to make a final stand against Gargarensis’ forces. Eventually, Odysseus arrives with a great army and counterattack. As they confront the cyclops directly, he is ordered by Arkantos to execute Gargarensis (who is revealed to be Kemsyt in disguise).

Back in Atlantis, Gargarensis has captured the city and taken the citizens prisoner. Ajax assists Arkantos in evacuating his fellow Atlanteans, along with Kastor and Krios. Arkantos orders Ajax to continue evacuating citizens and leave. He reluctantly agrees, and Arkantos battles Gargarensis alone. Ajax is last seen sailing away after Gargarensis’ defeat, and questions Arkantos’s fate.

In the sequel, Ajax makes his first appearance in Sikyos after Kastor destroys the temples on Mount Olympus. Initially, he believed that Kastor was a genuine enemy after being deceived into worshipping the Titans, but Amanra is able explain the situation to him. While Sikyos is being destroyed by Prometheus, he and Amanra rescue Kastor from the tricked Atlanteans. They head to Egypt and the Norselands to battle the lesser Titans, and return to defeat Prometheus. He accompanies Kastor to confront the servant of Kronos directly in the Atlantean colony, but they get ambushed by automata. After saving the Atlantean citizens, they take a sky passage which leads to the sunken remains of Old Atlantis, where Kronos successfully breaks out of Tartarus. In response, they plant trees to summon the Titan Gaia, who sends Kronos back to Tartarus.

Ajax after being rescued by Arkantos.

Ajax discussing the plans to take down Troy. 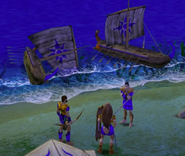 Ajax after the Trojan War.

Ajax and Arkantos after rescuing Odysseus.

Ajax at the Well of Urd.

Ajax with Kastor, Amanra and Arkantos.

Ajax meeting Folstag in the Norselands.
Community content is available under CC-BY-SA unless otherwise noted.
Advertisement