Ajax is a heavy muscle member of the Warriors. He is cocky, loud and always up for a rumble. He was played and voiced by James Remar.

Ajax is a stocky, brown-haired, blue-eyed Caucasian male, wearing a black tank top under his vest, with fingerless gloves, completed with slacks the color of his hair. He is the toughest member in the gang, and he is always trying to show his manhood. He doesn't like running from a fight. Despite all this, he is extremely loyal to the gang.

Though Ajax is the best fighter, he has the worst attitude and behavior in the crew, but he is highly dependable and always ready to help fellow Warriors when they need manpower. However, he is lustful to any girls, confident in his strength, and highly ambitious to have a high rank within the crew.

He is also quite a trash-talker, and has an extremely short temper. He often prefers to fight, rather than to talk things over or negotiate. Cleon is often annoyed with his attitude. On his first night as a Warrior, Cleon scolded him for causing trouble with the Destroyers. Despite his negative traits, Ajax is fiercely loyal to the Warriors, considering them as brothers, rather than normal gang mates.

Whenever a Warrior needs his assistance in a fight, Ajax is always ready to help, and the Warriors knew they could depend on him. Ajax's ambition is backed up with solid leadership skill, proven in Adios Amigo; he told Snow and Rembrandt to split up from him and Cochise, to find Sanchez and later meet at the subway - should things go awry - as a back-up plan.

Ajax's preferred method of insulting someone is accusing them of being or acting like "faggots", or "going faggot".

His most important appearance in the movie is the fight against the Baseball Furies, in Riverside Park, where he is ambushed, along with Cowboy, by the Furies. He seems to have a rivalry or dislike for Swan, the Warchief, and he disobeys his orders, which leads him to be arrested when he tries to rape a woman after the rumble with the Baseball Furies. The woman in the park was actually a cop, and she called for backup, who then arrested Ajax. Snow and Cowboy go back to check if he's safe, but they saw three squad cars, with Ajax being put inside one of them, and it was too late.

In the game, Ajax is playable in Coney after "Mission 6: Writer's Block", and during "Mission 7: Adios Amigo". He is also usable in part of "Mission 16: Home Run", which depicts the rumble against the Baseball Furies. He is also playable in "Flashback C: Heavy Muscle", which shows how Ajax and Snow joined the gang.

The most similar character in the book is Lunkface, although Lunkface is black, like most other members in the novel.

Lunkface tries to show his manhood several times during the novel: in a "piss contest" to see who urinated further and a contest to see who was able to put his head the closest to the wall of a tunnel when they were in the train, but he didn't win either of them.

Like Ajax, Lunkface ended up being arrested for attempted rape. Only Lunkface tried to rape a nurse, not an undercover cop.

The beginning of the comic shows Ajax and Swan fighting for the title of Warchief. Swan wins, but Ajax refuses to accept he has lost.

After his arrest, Ajax is sent to a low security prison where inmates are sent after the regular jails are full. During his time in prison, Ajax has many scuffles with an unnamed Baseball Fury, who Ajax would mock saying that the latter was not a Baseball Fury and that the Furies wear makeup. After being denied to wear colors, the unnamed Baseball Fury carved warpaint into his face with scissors, then made plans to kill Ajax.

The Warriors join forces with the Gramercy Riffs to spring Ajax and two unnamed Riffs, by starting a brawl outside the prison that would alert the guards. Swan breaks Ajax out of his cell. When Ajax and Swan try to escape, the unnamed Baseball Fury appears, Swan asks if he needs help, then Ajax denies his help and kills the unnamed Baseball Fury. The Warriors then regroup and escape back to Coney Island. Ajax thanks Swan then accepts him as Warlord.

Ajax is one of the most competent fighters in the game, and has the highest overall status of the Warriors. His fighting style is street brawler, like most other males in the game, including Snow. He overpowers his enemies with brute force.

He is the second player character in Armies of the Night. 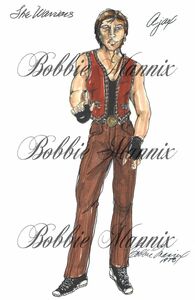 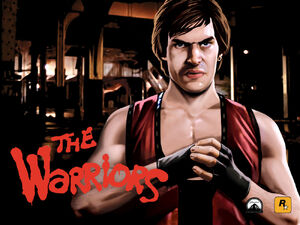 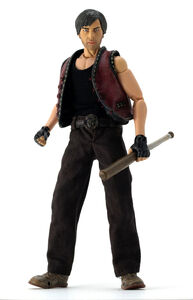