Akagi (Japanese: 赤城?, "Red Castle") was an aircraft carrier of the Imperial Japanese Navy (IJN), named after Mount Akagi in present-day Gunma Prefecture. Though she was laid down as an Amagi-class battlecruiser, Akagi was converted to an aircraft carrier while still under construction to comply with the terms of the Washington Naval Treaty. The ship was rebuilt from 1935 to 1938 with her original three flight decks consolidated into a single, enlarged flight deck and an island superstructure. The second Japanese aircraft carrier to enter service, and the first large or "fleet" carrier, Akagi figured prominently in the development of the IJN's revolutionary carrier striking force doctrine that grouped carriers together, concentrating their air power. This doctrine enabled Japan to attain its strategic goals during the first six months of the Pacific War from December 1941.

Akagi's aircraft served in the Second Sino-Japanese War in the late 1930s. Upon the formation of the First Air Fleet or Kido Butai (Striking Force) in early 1941, she became its flagship, and remained so for the duration of her service. With other fleet carriers, she took part in the Attack on Pearl Harbor in December 1941 and the invasion of Rabaul in the Southwest Pacific in January 1942. The following month, her aircraft bombed Darwin, Australia, and assisted in the conquest of the Dutch East Indies. In March and April 1942, Akagi's aircraft helped sink a British heavy cruiser and an Australian destroyer in the Indian Ocean Raid.

After a brief refit, Akagi and three other fleet carriers of the Kido Butai participated in the Battle of Midway in June 1942. After bombarding American forces on the atoll, Akagi and the other carriers were attacked by aircraft from Midway and the carriers Enterprise, Hornet, and Yorktown. Dive bombers from Enterprise severely damaged Akagi. When it became obvious she could not be saved, she was scuttled by Japanese destroyers to prevent her from falling into enemy hands. The loss of Akagi and three other IJN carriers at Midway was a crucial strategic defeat for Japan and contributed significantly to the Allies' ultimate victory in the Pacific.

She is voiced by Tia Ballard (who also voiced Happy in Fairy Tail, Zero Two in DARLING in the FRANXX, and Yue in Arifureta) in English and Saki Fujita in Japanese.

Akagi has long brown hair, left straight. She is typically seen wearing a muneate over white and red clothes along with a bow and arrow.

Usually depicted as a foil to Kaga. She comes of as a very kind, loyal, helpful and gentle girl. She is sometimes depicted eating something (usually rice or bauxite) due to her high cost in resources for maintenance in-game. 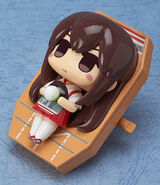 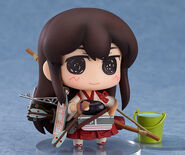