Akane☆Hoshi is one of supporting characters of the spin-off manga/anime series, Soul Eater Not!.

He is voiced by Takahiro Sakurai in the Japanese Version and Ian Sinclair in the English Version.

He had black hair and wears stylishly framed glasses.

Together with Black Star, Akane is one of the last remaining survivors of the Star Clan eradicated by DWMA. His left eye has a star-shaped mark over its iris as a sign of his lineage, which he covers with his hair fringes. In Soul Eater Not!, it is revealed that they are actually graduates of the EAT class assigned to pose as NOT students in order to secretly protect Princess Anastasia Yngling, who has been attending the NOT class under the alias Anya Hepburn. Akane and Clay appear in the main storyline as members of DWMA's personal Central Intelligence Agency, and participate in the battle on the moon to help defeat Asura and his minions. 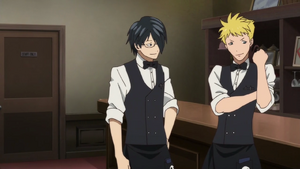 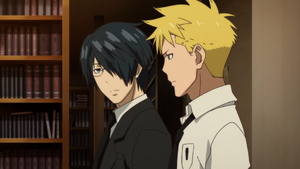 Retrieved from "https://hero.fandom.com/wiki/Akane☆Hoshi?oldid=2217583"
Community content is available under CC-BY-SA unless otherwise noted.