Heroes Wiki
Register
Don't have an account?
Sign In
Advertisement
in: Male, Manga Heroes, In Love,
and 33 more

Trying to win the heart of Aoi Akane.

Protect Aoi from being used as a sacrifice (failed).

Akane Aoi is a supporting character in Toilet-Bound Hanako-kun. He is a first-year student at Kamome Academy's High School division as one of Nene's classmates, and the vice president of the student council. However, he is secretly a Supernatural who controls the present, as one of the three Clock Keepers, along with Kako and Mirai.

He was voiced by Shun'ichi Toki in Japanese and Alex Mai in English.

Akane is a 15-16-year-old teenage boy with short reddish-brown hair and matching eyes. He wears the standard Kamome Academy high school uniform with a red-and-white Student Union armband held over his left sleeve using a safety pin and a pair of rectangular-shaped glasses (that were infused with magic by Teru Minamoto in order to seal his spiritual power and prevent him from being able to see Supernaturals).

Akane is mainly defined by his obsessive crush on Aoi. He has known her since they were kids and has asked her out 3,000 times, only to be rejected each time. More often than not, his feelings for Aoi prove to be enough to overwhelm his sense of logic for the sake of earning her affections. However, there is more to his feelings for her than the facade she put up. As ever since they were young, he felt that he always saw a form of genuineness in her that no one else saw. And even after discovering the truth that her cheerful nature was fake, he still remained loyal and loving towards her.

Apart from his obsession with Aoi, Akane is generally well known by other members of the cast for his hard-working, snarky, and cynical personality. As the vice-president of the student council, he is very competent in terms of his skills in serving as a leader to others. He also holds a deep hatred for Supernaturals, believing them to be unaware of the values of life and not understanding how Nene can befriend them.

As a result, he often wishes that he could still have been living a normal life as a regular teenager not involved in Supernaturals, in spite of him having already become a Clock Keeper at that point.

Akane and Hanako on a Volume 6 release notice.

Akane and Aoi on a Phantom Thieves Cafe Twitter Art.

Akane and Teru Minamoto on the Volume 14 cover. 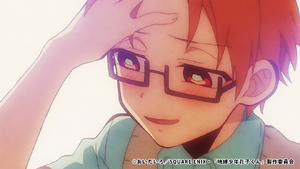 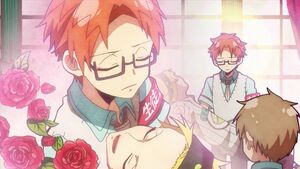 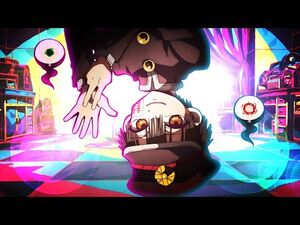