Akane Inuwaka is the older sister of Nazuna and part of the Inuwaka clan, a family of shinobi that aid the Thousand Year Protector. She is overprotective of her younger sister but doesn't let it show and always appears calm and composed. She is a strategic genius who always tries to do what she considers "cool." Her Arcana is Phoenix (Sound), who was charmed by her singing voice and now lends its power to her.

She is voiced by Mayumi Shindou.

Akane is part of the Inuwaka clan, a family of Shinobi that aid the the Thousand Year Protector. She is a bit overprotective of her little sister, but enjoys new experiences and is very optimistic. She thinks that she has the final word on what is "cool" or not. She's always worried about Nazuna, but she doesn't let it show and always appears calm and composed. She is actually a hard-worker but doesn't let others see her efforts, for that would be "uncool." Along with her work, she is a battle genius, she can instinctively gauge her opponents abilities and form a strategy to fight them instantly. 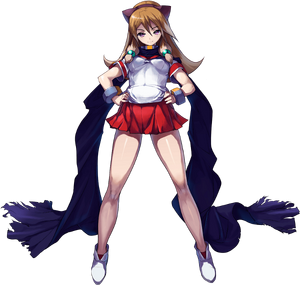 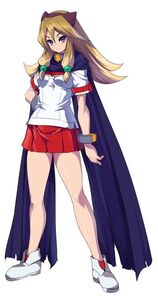