Akane Isshiki is one of the main characters in Vivid Red Operation. She is a 14 year old girl who is described as "innocent, overflowing with energy and is always positive". She is the granddaughter of Kenjirou Isshiki, the developer of the Vivid System, and is also the first user of the Vivid System.

She is voiced by Ayane Sakura.

Akane is a girl with maroon-colored hair styled into two ponytails on either side of her head. At home, she wears a red and white tracksuit jacket and bloomers of matching color, while at school, she wears the uniform of Oshima Elementary and Junior High School: a seifuku with a gray color scheme. After transferring to New Oshima Academy, she wears the default uniform of the school, a stylized seifuku with a black and white color scheme and a red ribbon, and wears white shorts and black socks.

She is often seen riding her airbike on land or on water, which she often uses in her part-time job of delivering newspapers.

Akane is known for her bright and positive attitude and her overflowing energy that cheers up those who are around her. She also has a strong sense of responsibility for those who need help, and will never abandon them no matter the circumstance. It does not mean that she is not vulnerable to sadness, however, as she is rather prone to being down when she is unable to help others, especially when she is held back by her fear of heights.

Akane is also revealed to be very fond of mayonnaise, and often smothers down a large serving on it when she's eating rice and other foods.

Akane belongs to a family of scientists, with her mother Mashiro and grandfather Kenjirou working in the early stages of a particular project that would solve earth's energy problems (and was the precursor for the development of the Manifestation Engine). However, seven years before the present time, an incident involving the reactors in the research facility caused Mashiro to be hospitalized up to the present time. This incident was also the cause of Akane's fear of heights.

Due to her mother's hospitalization and her grandfather's obsession with his research work, and with her father dead for a long time, Akane currently acts as the breadwinner in the family, working part-time as a newspaper girl to earn a living for the family while riding her airbike she calls "Wanko". Although her airbike has the capability of high-altitude flight, Akane only uses it while maintaining a 20 cm gap between the bike and the ground due to her fear of heights. 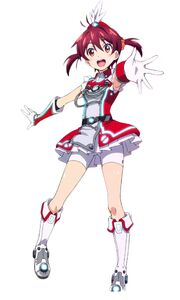