To trick Asahi and his friends

Demon
Akane Kōmoto is main character of My Monster Secret.

She is voiced by Mao Ichimichi who also voices Hikari Yagame from Digimon Adventure tri..

She has the body of a young girl with demonic horns.

She has pink hair and green eye.

Her true appearance is never confirmed. She is extremely powerful, although not omnipotent, ranking among the other high-rank demons, but she is jealous of them, since she does not have any legends about herself.

She have a childish behavior. Though rarely ever seen by the normal students, she often causes mischief for Asahi and company, and has a weakness for sweets. Akane is possibly the most powerful character in the series as she is capable of destroying the world or granting the wishes of others on a whim.

Akane gets lonely when one of her descendants gets married. 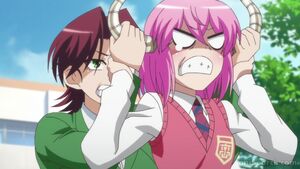 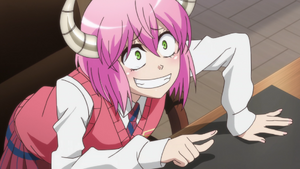 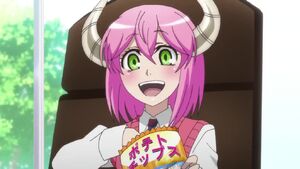 Retrieved from "https://hero.fandom.com/wiki/Akane_K%C5%8Dmoto?oldid=1756593"
Community content is available under CC-BY-SA unless otherwise noted.