To get out from Killing School Trip.

To stop Ryota Mitarai from brainwashing the world with hope (both succeeded).
To atone for her actions as Ultimate Despair (ongoing).

Akane Owari is one of the main characters in Danganronpa 2: Goodbye Despair, as well as a minor protagonist. She has the title Ultimate Gymnast.

At the end of the game, she and the other survivors managed to escape to the real world.

Akane is a tall young woman with an athletic build. She has tan skin, unkempt, shoulder-length chestnut hair, and brown eyes. She wears a short-sleeved button-up shirt with the top buttons undone, revealing her large chest size, a red miniskirt, and cream-colored sockless loafers.

Akane has a fiery personality, and always jumps on the chance for a fight and gets along very well with Nekomaru Nidai. However, she is very lazy and unmotivated and is a big eater. Despite her lazy and easygoing personality, she is a loyal person towards her friends.

Akane upfront seems to have a serious attitude, though she may say some quite out-of-place statements, some of which may include that if she had done something mistakenly, she would mention for someone else to do something specifically to her breasts. Even during class trials, she may say random statements that could relate to the murder (although in some instances, some recommendations that you could agree upon sometimes turn out to be true).

Overall, Akane is a very good acquaintance that doesn't fail to show her strength through her hard punches to her strong emotions. Her only known weakness is the fact that she is terrified of ghosts and very forgetful. She even forget Hajime's name many times such as when she called him "Hank, Harvey, and Hector". 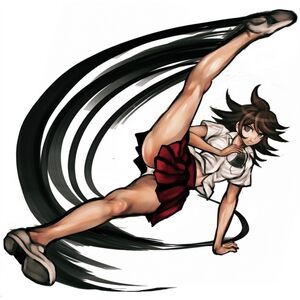