Akatsuki (暁 Dawn?) was the twenty-first Fubuki-class destroyer, or the lead ship of the Akatsuki-class destroyer (if that sub-class is regarded as a separate class), built for the Imperial Japanese Navy in the inter-war period. When introduced into service, these ships were the most powerful destroyers in the world. They remained formidable weapons systems well into the Pacific War.

The Akatsuki-class wears a white and dark blue serafuku with a "III" somewhere on themselves as well as some form of black legwear.

Akatsuki herself has long black hair, pantyhose and wears a flat cap. The "III" is on the left side of her collar. She also wears armor attached to her shoes for some reason.

The second of her class with a Second Remodel (First being Hibiki becoming Verniy), her clothes have been recolored dark grey with dark red stripes on white (like Fubuki and Ayanami before her), the scarf holder is now a light yellow color and the scarf itself is tied differently. She now sports a searchlight over her left shoulder, two Twin HA 12.7 cm guns on her right arm and a depth charge holder hanging down her left side. The right "shield" has been removed.

Her personal variation on her class's outfit is wearing opaque black pantyhose and a flat cap with an anchor symbol on it. The "III" is on the left side of her collar. She also wears two plates of armor attached to her shoes while in her combat gear for some reason (absent in her second remodel).

Personally, Akatsuki does her best to act like a true lady and thus, doesn't like to be treated as a child, especially including head-patting. (With attestations of being a "full-fledged lady" or "first-class lady" being something of a catchphrase.) This has the side effect of making her look even more childish. Many characters enjoy teasing her by doing things that play upon her being childish, such as giving her children's meals. 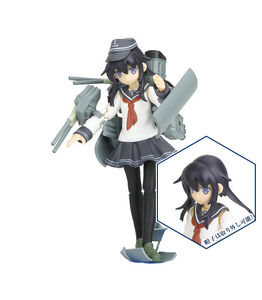 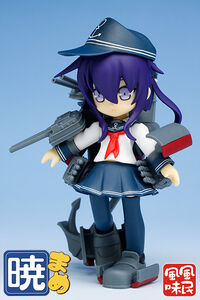 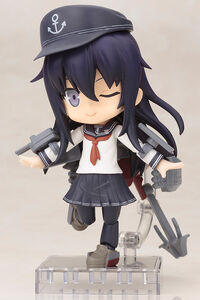 Retrieved from "https://hero.fandom.com/wiki/Akatsuki_(Kantai_Collection)?oldid=1826699"
Community content is available under CC-BY-SA unless otherwise noted.