To lead his pack

Akela is a minor character in the 1967 Disney The Jungle Book and a guest character in it's 1996-1998 prequel series Jungle Cubs.

He is voiced by John Abbot in the film and Rob Paulsen in Jungle Cubs.

A young adult Akela makes a guest appearance in the episode "The Coming of the Wolves", which takes place many years before the film.

Akela is shown to have previously lived in a wolf pack led by Cain. One night, Akela and his pregnant mate Leah plan to flee their pack as Cain wishes to have Leah for himself. They are caught by Cain and other members of the pack, but the two are able to escape.

The two later arrive at ancient ruins, where they meet a young elephant named Hati, who panics at the site of the wolves. They later encounter Hati's friends Bageheera, Baloo, Louie, Kaa and Shere Khan, who clash with the two, forcing them to leave.

Akela is the leader of a wolf pack in the Indian jungle that adopts a human baby whom is named Mowgli and is cared for by Raksha and her mate Rama alongside their own cubs.

Ten years later, the pack learns that a tiger named Shere Khan is returning to their part of the jungle. Knowing of the tiger's hatred for humans, Akela and the rest of the pack decide that for Mowgli's own safety, he must leave the pack. Akela calls Rama forward and informs him of the pack's decision, much to Rama's dismay.

A panther named Bagheera (who had found Mowgli and given him to Raksha and Rama) suggests that Mowgli goes to a nearby Man Village, to which Akela agrees.

Akela with his pack and Bagheera.

Akela telling Rama that Mowgli has to leave the pack to avoid Shere Khan. 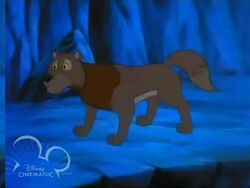 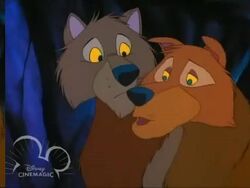 Akela and his mate Leah. 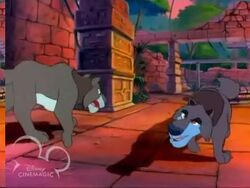 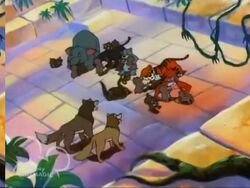 Akela and Leah watch their cubs play with Hati, Bagheera, Baloo, Law, Shere Khan and Louie.
Add a photo to this gallery

Retrieved from "https://hero.fandom.com/wiki/Akela?oldid=2183092"
Community content is available under CC-BY-SA unless otherwise noted.