Akiha Tohno is a heroine from Tsukihime who is the younger sister of Shiki Tohno and the head of the prestigious Tohno family, as well as a student of the elite Asagami Private Girls Academy.

Akiha is very protective of her brother. After their father Makihisa dies, Akiha becomes the new head of the family and invites Shiki to come back to the Tohno family mansion. This is where the game begins after the prologue. Shiki quickly realizes Akiha has changed dramatically from the little sister he grew up with, and has become very focused on etiquette and acting according to her station. She is quick to scold Shiki on numerous things, but he takes it in stride. Circumstances soon cause him to suspect Akiha is hiding many things about the family from him. In spite of this however, she is a good person at heart.

Akiha is rather hostile towards Arcueid and Ciel, though she gets along well with the maids. Her family records claim that the Tohno family is of non human origins.

Akiha has long black hair (that turns red in her Crimson Red Vermillion form) decorated with a white hairband. During school she wears the standard Asagami uniform, even when she later transfers to Shiki's school. Her casual clothes consists on a white shirt with a red ribbon on the necktie and a long red skirt.

In the anime, Akiha takes her role as the current head of the Tohno family. She is shown to be very prim and proper and with grace and nobility. As the story progresses, it is revealed that she has had mysterious powers since childhood. When her Tohno blood awakens, her hair turns a crimson shade. Akiha can manipulate her hair as if it was prehensile and she can drain the life force out of anything her hair is in contact with, which creates a burning effect on the object.

In the manga, she has the same protective role towards Shiki than in the anime. However, there is one slight difference in the way Shiki remembers his past: After he recalls how there was another boy in his childhood and how he had killed him, SHIKI appears and attacks him. Shiki is saved by Akiha and Kohaku and the two siblings have a confrontation about Shiki. After Akiha tells him that she does not ackwnowledge him as her brother anymore and that Shiki is her brother now, an enraged SHIKI tries to attack her but she is protected by Ciel. She explains to Akiha that her true brother is Roa's current incarnation, much to Akiha's shock who had no idea about it and just believed that he came back to kill Shiki again.

As a playable character, Akiha has great versatility in all of her Moons, boasts the game's highest defense values, and generally favors using her very strong normals to bully the opponent into the corner where she can work her setplay. Her main weakness is her relatively low speed and somewhat low damage output, though neither of these are especially damning faults and she is usually considered a strong mid tier character. 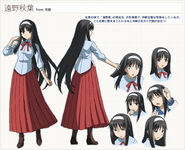