Heroes Wiki
Register
Don't have an account?
Sign In
Advertisement
in: Articles under construction, Teenagers, Fighters,
and 14 more

Akino Onko is a main protagonist alongside Hirana Asu and Rei Sakigake in WIXOSS DIVA (A) LIVE. When she, Hirana, and Rei formed a new Diva team, she wanted to leave the team because she thought she wasn’t a cute Diva, but she decided to stay on the team.

When Akino watched the Diva battles, she enjoyed watching them a lot, but when Hirana challenged the other Diva Teams to a whispering battle, she formed a new team with Hirana and Rei to defeat the vicious Diva team. The battle was fierce, but in the end she, Hirana and Rei won the battle. And even though she wanted to resign from her team because she didn’t think she was a cute Diva, she eventually decided to stay on the team she formed and fight in many Diva battles. And once in one fight, she acted as the center of the team instead of Hirana.

Akino is lying on a swimming mattress

Akino sits by the pool 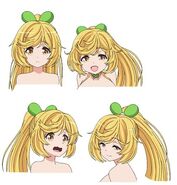