Heroes Wiki
Register
Don't have an account?
Sign In
Advertisement
in: Male, Cartoon Heroes, The Simpsons Heroes,
and 10 more

Akira is a recurring character from The Simpsons.

He is the sensei of a karate dojo, a waiter at The Happy Sumo sushi restaurant and an employee at Costington's department store.

As a young boy in Japan, Akira was a minor child-star on television. He spent four years playing the part of "Whitey" on "Let Trouble-Makey Beaver Do Himself." a Japanese sitcom inspired by a 1950's American TV show. As he grew older, acting jobs became scarce, so Akira enrolled in a cooking school. Upon graduation, he came to America and opened a restaurant in Springfield called "The Happy Sumo." In addition to the culinary arts, Akira practices the martial arts, teaching karate at the Springfield Learning Annex. Lately, Akira has returned to his first love, acting. He has recently been seen on the stage of the Little Tokyo Theater in Kabuki productions of "Sumo Like it Hot" and "A Raisin in the Rising Sun."

He is voiced by Hank Azaria and George Takei. 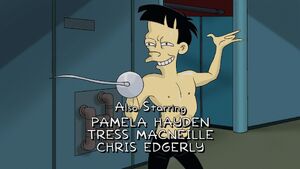 Akira as Sulu from Star Trek 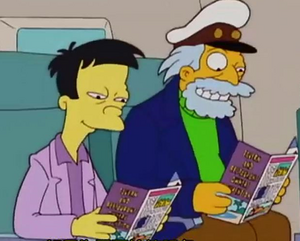 Akira, with sea captain on the plane

Akira in "The Simpsons: Tapped Out" 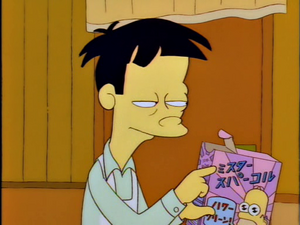