Akira Date (伊達 明 Date Akira) is a combat medic who traveled the world much like Eiji Hino, who he saw in Africa during a Civil War and had an Automatic Colt Pistol bullet stuck in his brain after being shot which causes him great pain at times. When he comes back to Japan he is hired by the Kougami Foundation to be the user of the Kamen Rider Birth system as well as the first one to use it. He takes up the job as Birth so to earn one hundred million Yen for the surgery to remove the said bullet. The bullet causes him greater pain over time and starts to affect his performance in battle. After taking up Dr. Maki's offer to work for the Greeed with a bribe, he reveals that he was doing so at Kougami's behest, which would earn him the amount of money enough to afford his surgery. He was later wounded on the job to the point where he can no longer fight effectively and resigned his position from the Kougami Foundation, obtaining his money and leaves the country to get his surgery done with Shintaro succeeding him. Later, he returns after recuperating from his surgery and becomes the user of Birth Prototype Version to fight against the Greeed.

Date first appeared as Birth while using the Breast Cannon on Mezool as the Mega Greeed Out of Control to damage her and release two of Uva 's Core Medals. For the rest of his time as Birth he would fight the Yummy to collect their Cell Medals while also helping some of their hosts and assisting OOO when needed. He also trains Goto to take his position after finishing his task as Birth. But over time, the bullet in his head gave him greater pain, causing him to collapse during battles. Maki bribed Date to betray Kougami and join his side, which Date accepted as he starts supporting the Greeed. But in reality, Date faked the betrayal under orders from Kougami to stop Maki from becoming a Greeed.

When the Greeed injures Date in retaliation, knocking him unconscious, it gave Goto the motivation to use the Birth Driver and avenge Date's "death". Though it turned out that he was in no mortal danger from the Greeeds' attack, Date decides to let Goto become the new Kamen Rider Birth. He uses the danger policy he signed with the Kougami Foundation to collect ¥50 million so he can travel abroad to have surgery done to remove the bullet from his brain. Along with the ¥50 million that Maki paid him, he now has the ¥100 million yen he wanted for his surgery and to set up a medical school in the country where he and Eiji were involved in a civil war. Later, he returned to Japan once again and became the user of Kamen Rider Birth Prototype Version to fight against Greeed.

Akira returns to Japan for aiding Satonaka after receiving a call about the berserk Kamen Rider Poseidon. He fights it by transform into Birth Prototype but lost easily and even the aid from Goto won't help. As the result, the Proto-Birth Driver was damaged and Akira was later hospitalized alongside Goto. At the next day, he returns alongside with Goto to help Eiji for some minutes without transforming. Of course he is defeated as a result. In the end, he helps Chiyoko clean up Cruise Crousier after the battle is finished.

Date and Goto arrive to assist Eiji in fighting Bujira and his offshoots. Once Gokai Red and Kamen Rider Diend finish their battle, Gokai Red wipes Birth and Proto-Birth out. When Gokai Red and Kamen Rider Decade were revealed to acted like a villain, Birth and Proto-Birth, along with any Riders and Sentai warriors are actually in another strange dimensions where they are held, as both Decade and Gokai Red set them free and the time for counterattack against Dai-Shocker and Dai-Zagyack.

While out of boredom, Date writes a short story about the Birth Drivers. Despite being sentient, the belt isn’t capable of speaking human language. At one point the belt says “Sometimes I just want to scream, but then I realize I can’t.” But it is still able to communicate with other items, such as the Proto Birth Driver and other Candroids. The belt recollects his memories with Date and Goto, he goes on to praise Date by saying how strong he is, how masculine he is and how much fun they had together. Goto on the other was too unreliable and weak in the beginning, Birth Driver eventually came to accept Goto.

The Prototype Birth Drive that was destroyed in Mega Max makes a brief appearance and says “A transformation belt that can’t transform is just a regular belt. Actually, it’s even worse. A regular belt is at least used as to keep someone’s pants up! I can’t even do that. I’m just a heavy object around the waist!” Doctor Maki also makes a minor appearance by creating a Yummy from the Birth Driver. The Yummy is called Kamen Rider Death and looks similar to Kamen Rider Birth, but he’s not really a Kamen Rider. The Candroids, Mr. Gori (a Gorilla Candroid) and Mr. Tiger (a Tiger Candroid) as the Birth Driver refers them as, destroy the Yummy.

Date is a happy-go-lucky man who hates reading manuals and has a tendency in mixing up names (he often calls Ankh as "Anko"). Despite this, he enjoys getting his job done perfectly and believes risking big in order to win big, thus proclaiming that he'll be taking all the cell medals from here on out. Date is a people person, admitting his own desire, yet he makes it a personal rule of his to not use others to reach his goal, as well as not doing anything that will make him cry. He is also somewhat reckless, getting Ankh in a line of fire while fighting the Kabuto and Kuwagata Yummy. Date is also known to love eating oden, even making oden in Kiyoto Maki's research lab, while at the same time taking up residence and making a big mess out of it, much to Maki's ire. He has taken a liking to Shintaro Goto, training him in order to take up the mantle of Birth once his job is over. He has a big brother-little brother/father-son dynamic with Shintaro and he is always happy to see the latter grow. When he comes back to Japan after his surgery and sees how his "son" has now becomes his own man and doing better than he was before, he exclaimed that "father is happy". Before battle, Date tends to say "Now, let's start earning" (さあて、稼ぎますか Saa te, kasegimasuka). In the battle with the Unicorn yummy he shown difficulty in battle that may be involved with a bullet that is lodged in his brain.

His fighting style as Birth is a combination of mixed martial arts and pro wrestling techniques, as shown in particular against the Omu and Unicorn Yummy. Due to his dislike for reading manuals, his use of the Birth system tends towards the "learn as you go" approach and as such, he is not as effective as Shintaro when it comes to using the exosuit and its armaments.

Date is a skilled combat medic with years of experience under his belt. He is able to treat people's wounds with whatever he has on him and figure out the best way possible to treat them. 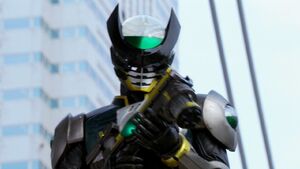 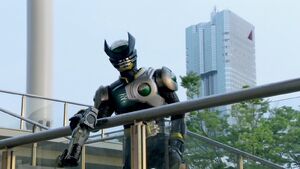 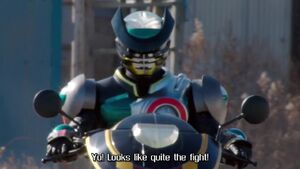 Retrieved from "https://hero.fandom.com/wiki/Akira_Date?oldid=2026222"
Community content is available under CC-BY-SA unless otherwise noted.