No information
Akira Kazama is a character from the 1990's video game series, Rival Schools.

She is a quiet girl who rarely speaks her thoughts. She can be tough and commanding while wearing her biker gear, but is a docile and gentle person otherwise. Her biker outfit was originally intended to hide her true gender prior to enrolling in Gedo High. She is the younger sister of Daigo.

In Rival Schools: United By Fate, she is on a mission to find out what happened to Daigo, and posed as a boy under her motorcycle helmet and biker gear. On her way, she befriends two of his subordinates, Edge and Gan. The three of them eventually rescue Daigo, and afterwards, Akira reveals her true identity to Edge and Gan.

In Project Justice, she was transferred to the all-girls Seijyun High, leaving her without any friends, until she found one in Yurika, and later on, Zaki. This was due to the fact that she noticed her brother's change in personality after returning from training. 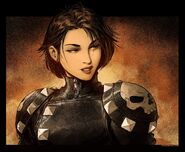