Akitsu Maru (あきつ丸?) was a Japanese landing craft depot ship and escort aircraft carrier operated by the Imperial Japanese Army. In some sources Akitsu Maru and her sister ship Nigitsu Maru are also considered to be the first amphibious assault ships.

In her unremodeled state, she sports a grey military uniform complete with peaked cap, a pleated skirt and a pair of thighhighs with a pair of white sneakers along with a white randoseru and a pouch. Attached to her hips are grey ship parts. She holds what appears to be her deck.

In her remodeled state, her uniform changes to black in colour, while her backpack is turned red, her ship parts went from grey to green and platforms are added under her sneakers. She gains a flight deck in the form of a scroll made out of two halves of a flight deck, a drawing of her flight deck on the scroll as well as siddham writing all over both parts. She now holds a lantern.

Otherwise, she has short black hair along with black eyes and pale skin. 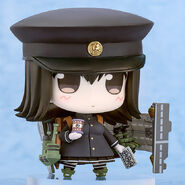