Akizuki (秋月?) was the lead ship of her class of destroyer in the Imperial Japanese Navy.

With Akizuki launched in 1942, the Akizuki-class were 15 years younger than the Fubuki-class that defined IJN destroyers that came after her, and had many improvements over earlier models. By a significant margin she was larger than all previous destroyers, not only in Japan but worldwide, and was the first destroyer with a primary anti-aircraft role. She was considered a well-designed ship, although one that unfortunately came too late to make much difference in the war by that time.

Akizuki appears somewhat older than most of the other destroyers. Her serafuku includes an armored "corset" and neck-guard designed to evoke the image of the ship's bow, but is otherwise white-and-gray with a yellow neckerchief. She has mid-length black hair in a ponytail with a slight ahoge sticking up from her hachimaki, and blue eyes.

Her combat gear includes a large torpedo launcher strapped to her back with a small "bridge" hair ornament on her head used to tie her hair into the ponytail, and a split bow (similar to how Nagato carries her turrets) with two Rensouhou-like familiars, Chou-10 cm-hou-chan. She also carries four spare 10 cm barrels in a thigh strap holster on her right leg, referencing the 10 cm Type 98 gun's short barrel life requiring frequent barrel replacement. 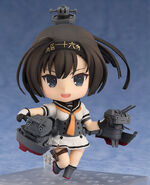