Ako Hayasaka is Blue Swallow of the Jetmen. Bright and cheery, she is an 18-year-old high school student and wants to marry a rich man.

Ako was attending high school when she was given the Jetman powers accidentally. After the Earth Ship was destroyed, the Birdonic Waves escaped and struck Ako while she was out walking, unbeknownst to her, she had gained the powers of the Blue Swallow.

Ako could be rude and cheeky, for example asking for a wage if she became a Jetman, calling the Chief a hag and being rude to her teachers. She could also be very emotional, for example when the Vyram turned her childhood teddy bear into a monster and when her love interest Dan was killed. She was best friends with her singing partner Kyoko and good friends with her fellow Jetmen especially Kaori and Raita.

In the epilogue set three years after the final battle, Ako has become a singing sensation and she attends Kaori and Ryu's wedding.

Later, Ako, alongside her team, joined forces with the Fivemen, Zyurangers, Dairangers, and Kakurangers to defeat the evil Emperor Daidas and his forces. 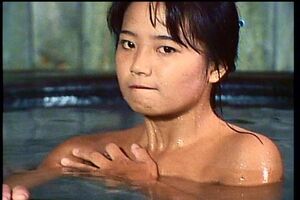 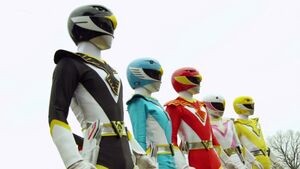 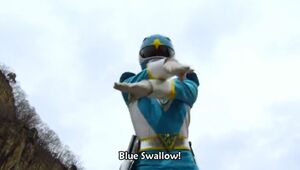 Retrieved from "https://hero.fandom.com/wiki/Ako_Hayasaka?oldid=1754857"
Community content is available under CC-BY-SA unless otherwise noted.