Giving his hosts extra lives
Glowing in the dark

Spending time with his allies.
Talking with his brother.

To protect the world and his allies from evil threats (succeeded)

Aku Aku is a witch doctor whose spirit now lives in a wooden mask who guides Crash, his sister Coco, and their friends as they defeat the forces of evil. He has made appearances in every Crash Bandicoot game, although one of them is just a cameo. In the platforming Crash games, from the original up until Crash of the Titans, if 3 masks are found, Crash becomes invincible for a limited amount of time, with Aku Aku being placed on Crash's face during this period. He is the deuteragonist of the series, as well as a father figure to Crash, Coco and their friends.

After Crash runs from Cortex and washes up on N. Sanity Beach, he frees Aku Aku, who provides his magical services throughout the game, scattering Aku Aku crates all across the three islands. He does not have a speaking role in this game, except in the Japanese version, where he gives hints when he is freed (except if the mask gives invincibility), but it's only in text, aside from the chant heard whenever a mask is collected in all other versions. He joins Crash to help stop the pollution Cortex has caused.

Once again, Aku Aku aids Crash in his adventure by providing protection against the dangers he comes across. He is still capable of little speech, and he doesn't act upon Cortex tricking Crash into collecting the Crystals for him.

For the first time in the series, Aku Aku has the ability to speak in full sentences other than Japanese. After a piece of shrapnel from the Cortex Vortex plummets to Earth and demolishes Uka Uka's underground prison, Aku Aku hears his evil laughter in the distance, and tells Crash and Coco of how he sealed him there eons before, to protect the world from his malice. He brings them to the Time Twister machine, and instructs them to collect the crystals scattered across time before Cortex and Uka Uka do so. Like in the previous games, he protects Crash (Not like the other games however, Coco is a playable character and is protected by Aku Aku as well) from any obstacle, aside from falling. Later, he joins Crash as they confront Uka Uka and Cortex in a final battle. While Crash deals with Cortex, Aku Aku is locked in a fierce battle with Uka Uka; the two of them soon become an obstacle in of themselves, who can actually damage Crash by creating an energy beam between them that grows larger gradually, brawling around the arena, and spinning around for a second, then plummeting to the ground and creating an explosion several times around the arena, which Crash must avoid along with Cortex's attacks. Crash and Aku Aku defeat Cortex and Uka Uka, but the Time Twister malfunctions and self destructs due to N. Tropy's defeat (if the player has all of the gems), sending Cortex and Uka Uka into a time portal. Having just escaped, Crash, Coco and Aku Aku are seen in their home, when Aku Aku lights a fire in their fireplace. Aku Aku tells them "The Time Twister Machine could not hold itself together. We were lucky to escape". After a cutscene with Cortex, N. Tropy and Uka Uka starts, Aku Aku says "It is difficult to say what has happened to our enemies, but I doubt we will see them for a loooong time". As usual in the Japanese version, he gives hints when freed (except if the mask gives invincibility, or in Time Trial mode), this time actually speaking instead of Japanese text.

In Crash Team Racing's adventure mode Aku Aku serves as the player's tutor for the good characters (Crash, Coco, Polar and Pura) and welcomes them to the adventure arena. He guides them on their quest to save the world from Nitros Oxide and tells them a little bit about the world they're in. After a race, he gives the good characters advice for while they're racing like how to power slide successfully or get a TNT Crate off their head. His hints can be re-heard in the menu section "Aku Aku's Hints". He also appears as an item for the good characters (Crash, Coco, Polar, Pura and Penta Penguin), giving them temporary invincibility from incoming weapons and as a weapon to anyone touching him. He also appeared in the opening menus coming out of the Naughty Dog crate with Crash, Cortex, Coco, Tiny and Oxide.

Aku Aku and Uka Uka meet inside a temple in hyperspace and attempt to end their conflict by holding a contest. Uka Uka submits Cortex, N. Brio, Dingodile, Rilla Roo, Tiny and Koala Kong as his players, leaving Aku Aku with a mere Crash and Coco causing him to complain that Uka Uka has the advantage and that each side should be equal. Aku Aku then evens the odds by switching Tiny and Dingodile to the good side. Aku Aku then leads his team through various minigames in order to defeat Uka Uka's side.

After spotting an assortment of unusual weather occurrences, Aku Aku comes to the conclusion that Uka Uka has released the Elementals. He appears inside a temple in hyperspace, where Uka Uka denies any mischief; however, the Elementals themselves soon show up and attack Aku Aku, who barely escapes. After appearing back home, he reveals to Crash and Coco what has happened and that they must collect the crystals to stop Cortex and Uka Uka. Delighted at Coco's new VR HUB device, he allows them to use the machine to begin their adventure. He and Crash succeeded in defeating Crunch and each elemental. After the final battle the Elementals are defeated for good and Crash, Aku Aku and Crunch escape. At the end, Crunch is revealed to have been brainwashed and thanks Crash and the gang who accept him as a new member their family.

He later appears in Crash Bandicoot: The Huge Adventure to help Crash defeat Dr. Neo Cortex. Aku Aku is the one who told Crash he must collect all 20 crystals to power the machine capable of stopping Cortex's Planetary Minimizer and in the end it works.

Then in Crash Bandicoot: N.Tranced he helped Crash find a way to get to N. Tropy's base and ruin N.Trance's and N. Tropy's plan. When N. Tropy attempted to abduct him and hypnotize him Aku Aku was able to free him (Creating Fake Crash in the process). Using crystals Crash collects, he helps Crunch, Coco, and Fake Crash before defeating N. Trance and N. Tropy.

In Crash Nitro Kart, Aku Aku has a similar role to Crash Team Racing, serving as the tutor for Team Bandicoot. In the beginning of the game, he is seen discussing weight loss with Crunch before their home is abducted and sent to Velo's Citadel.

Aku Aku reappeared in the third handheld title, Crash Bandicoot Purple: Ripto's Rampage when he and Coco noticed strange beasts walking around they called Crash. So Crash and Aku Aku set out when they met Spyro and Sparx where they teamed up to stop Cortex and Ripto.

Aku Aku maintains his usual role of giving Crash extra hit points upon collecting masks hidden inside crates, but he cannot protect Crash from TNT or Nitro crates (not even when he is being used as a golden mask). He protects Crash from almost all other enemies. He, upon spinning the first Aku Aku Crate at the beginning of the game, gives a small speech to Crash. He states that it is, once again, him, Aku Aku, and he states that his duty is to protect the player. This may have been added in to explain his purpose to new players of the Crash Bandicoot Franchise. Later, after Uka Uka is defeated, he teams up with his evil brother to defeat the Evil Twins, but they are unsuccessful, as shown when the Evil Twins appear to return the lifeless masks to Crash and Cortex. Victor, as stated to Crash and Cortex: "Fools! Did you really think that these party toys could defeat us!". Aku Aku also suggests handing Cortex over to the Evil Twins. He helps the team throughout the game.

Aku Aku masks make cameos in Crash Tag Team Racing as masks held up by spears on the track Tiki Turbo and can be heard saying his noise when he is summoned.

Aku Aku appears in this game giving out tips and is a special power-up for players. He also tells the player the results of mini games.

Aku Aku drops his role of supplying mask crates for extra hit points in favor of staying with Crash at all times, allowing Crash to use him for various tools, including giving him the ability to jack titans and he also can block light attacks. He can even be used as a skateboard for Crash. In the beginning of the game, Cortex attempts to kidnap Coco and Aku Aku, but only succeeds in taking Coco; Crash manages to rescue Aku Aku and retrieve him before long. From there he jacks monsters with Crash and teleports him to various locations. Aku Aku's appearance has changed significantly from the previous games. Aku Aku now has a wider and broader face than his original model and has feathers covering all the edges of his face apart from the bottom.

He still helps to jack Titans but he is not visible on the Titan's face. However, the Titan's eyes change their glow from red to green, and the cloud of dark Mojo surrounding the Titan disapears. He is also able to shrink one titan at a time so it fits inside Crash's pocket. In the PS2 version certain Titans are too big to be shrunk, like Yuktopus and Scorporilla. He also gives Crash various hints throughout the game.

Just like in Crash Team Racing and Nitro Kart, he helps Crash give him some hints and advice in the game about Power ups and his quest to help Yaya. You will notice that Aku Aku's face is grey yet his item icon shows his usual brown color.

Aku Aku is in the form of a brown wooden mask with yellow eyes, green bags under his eyes, red lips and eyebrows, and (mostly) four rainbow colored feathers on the top of his head in contrast to Uka Uka's bones, red lips, beard and black face. Aku Aku often tends to keep a straight face therefore exposing his teeth most of the time. Other noticeable features on him is his green goatee at the bottom of his mask, he kept this up until Crash of the Titans, in which his appearance is much more "ape-like" in contrast to his original appearance. In Crash of the Titans his appearance changed from a rectangular mask to a more circular mask. He lost the green bags under his eyes, has feathers all around him, green leaves on his sides and lost his goatee.

Aku Aku is a happy, good hearted, and peaceful being, but at the same time he knows when to take important matters (like saving the world) seriously. He is kind and has helped Crash, Coco, and Crunch throughout many of the games. He is also obedient to the rules of his superiors "The Ancients", mysterious beings who strangely have never been seen. 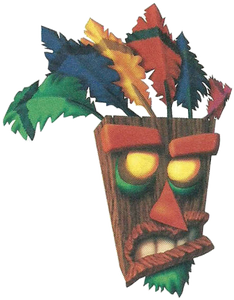 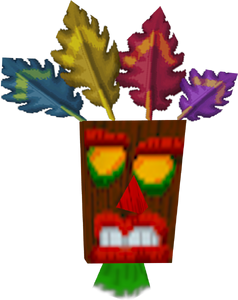 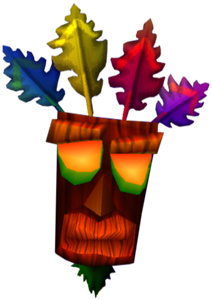 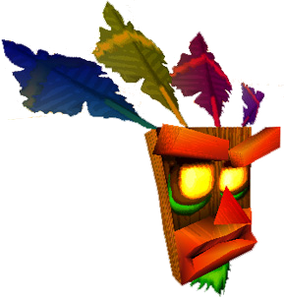 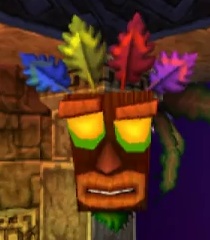 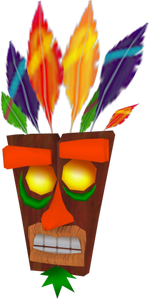 Aku Aku in Crash Bandicoot: The Wrath of Cortex. 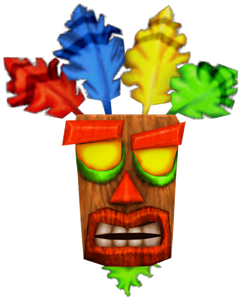 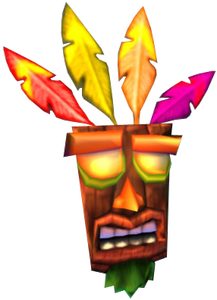 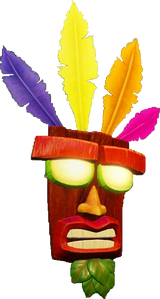 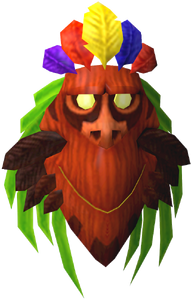 Aku Aku in Crash of the Titans and Crash Mind Over Mutant. 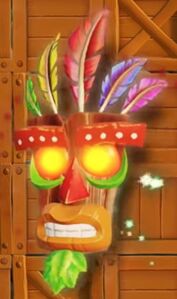 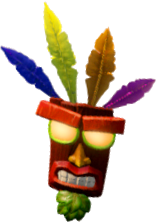 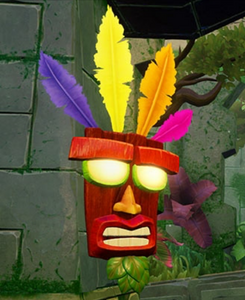 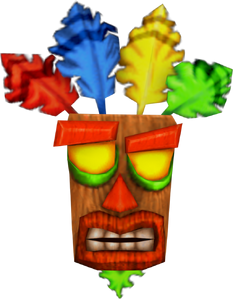 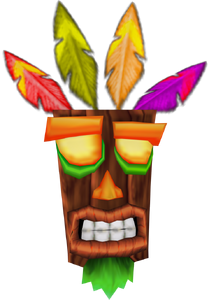 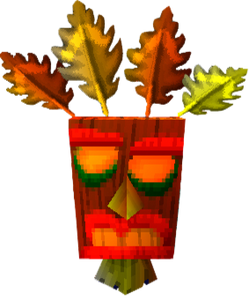 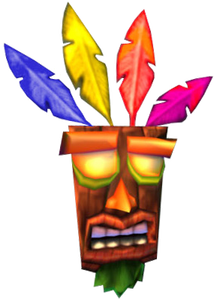 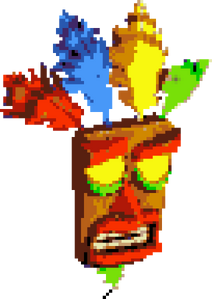 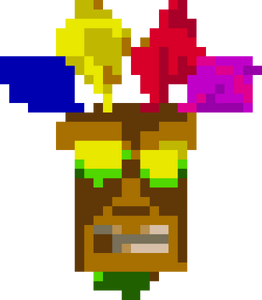 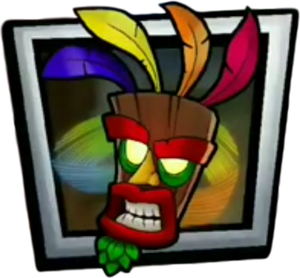 Retrieved from "https://hero.fandom.com/wiki/Aku_Aku?oldid=1710217"
Community content is available under CC-BY-SA unless otherwise noted.