The Akumaizer 3 are the titular main protagonists of the 1975-1976 Tokusatsu show Akumaizer 3. They are a trio of demons who were originally of the underground Akuma Clan but, after the Akuma Clan declared war on humanity, defected to defend humanity from the invaders.

After Xavitan, a demon born to a human mother and demon father, defected from the clan when they began their invasion of the surface world, Evil and Gabra were sent by Mezalord to capture him and bring him to face tribunal for his treason.

Xavitan defeated both of them but spared their lives, leading them to join up with him defending humanity.

In the finale, all three have their bodies destroyed, but their souls live on and would go on to bestow three human beings with the power to become the Choujins to defend humanity once more from invading Youkai. 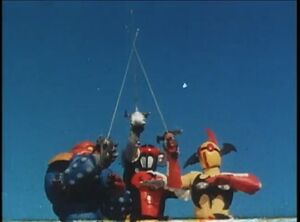 Add a photo to this gallery
Retrieved from "https://hero.fandom.com/wiki/Akumaizer_3?oldid=2036120"
Community content is available under CC-BY-SA unless otherwise noted.