His Pokémon Charizard
His Mega Evolution into his Mega Charizard X

Travelling with his Pokémon partner Charizard

Alain (Japanese: アラン Alan) is a character from Pokémon the Series, serving as the main protagonist of the side story Mega Evolution Specials series, and a supporting character and one of the two deuteragonists (alongside Serena) in Pokémon the Series: XYZ. Alain is a Pokémon Trainer seeking to defeat all Mega Evolved Pokémon using his Mega Charizard X.

Alain is a tall, slim teenager with messy black hair, and blue eyes. He typically sports a pair of baggy, gray pants, a black, leather jacket, black boots, a blue shirt with a white undershirt, and a pair of fingerless gloves. He also wears a pale, blue scarf that closely resembles the flames that appear from Mega Charizard X's mouth.

Alain is shown to usually be focused on his goals, yet often exhibits aloof behavior and can wander off in thought. He at first seems to push others away from him, but he helped Mairin capture Flabébé with hints on strategy. He does, however, have a close bond with his Charizard, and has become accustomed to Mairin's companionship as shown in Mega Evolution Special II. Alain doggedly pursues his goal of becoming the strongest, often ignoring the concern of others.

Alain has a tendency to push away the people he wants to protect. During his time working at Professor Sycamore's lab, Alain was much more cheerful than he is in the present. While he has distanced himself from Professor Sycamore, it is clear he is still concerned about him. In  Mega Evolution Special I, Alain purposely tried to leave Mairin behind to keep her from his dangerous mission of engaging Primal Groudon and Kyogre. Failing that, he later returned to Kalos alone, leaving her behind.

His character took a darker turn at the end of Mega Evolution Special IV. Blaming himself for Chespie's falling into a comatose state because of his pushing Mairin away, he became disgusted with himself and began obsessively pursuing the completion of Lysandre's Mega Evolution energy system. His goal thus became to gain strength and complete the system in order to heal Chespie and help Mairin smile again. To meet this end, he worked with Mable and Aliana in their mission to capture Z2, succeeding in distracting Z2 long enough for the Team Flare Scientists to weaken it.

Alain is a good sport, and is shown to take his losses well. When he wins battles, he likewise congratulates his opponents on putting up a good fight, which is how he befriends Ash. When he loses, he doesn't let it bother him, instead devoting himself to train even harder. He greatly enjoys a challenge, becoming visibly excited when he and Charizard were pushed into a corner in their second battle with Ash-Greninja. This excitement and desire to once again battle against Ash in a competitive fashion similar to their previous battles would drive him to quickly attain enough badges to compete in the Lumious Conference, something that he admitted to Korrina following his victory over her at the Shalour Gym.

By the time of the Kalos League, however, Alain's attitude had become more serious and cold, as the only thing he really cared about was proving that he was the strongest trainer. Although showing brief glimpses of amusement in his battle with Trevor, after thoroughly defeating him, he would resume with his cold and serious demeanor. Likewise, when Remo failed to give him a real challenge, Alain just expressed indifference to the battle and, as in his battle with Trevor, left the arena without congratulating or praising his opponents as he would have in the past, further enforcing how obsessed he had become with gaining strength and battling fiercely competitive battles. However, despite this darker persona, Alain still showed signs of his old self when talking with Charizard about he was genuinely looking forward to his battle with Ash in the finals. He would afterwards open up to Professor Sycamore and explained the motivation and reasons for his actions, reaffirming his desire to become stronger in the process.

During his battle with Ash, Alain admitted to himself that Ash's excited attitude and eagerness to enjoy battles are what made him such a great opponent, and that battling Ash made him truly enjoy the battles themselves, causing him to lose track of time.

When Team Flare attacked Lumiose City and revealed their true motives, Alain felt betrayed by them and began to feel a great sense of guilt in him. After Lysandre proclaimed the dawn of his new world to him, Alain collapsed in frustration and anger. These feelings would lead him to turn against Team Flare and join Ash, whom Alain said helped "open his eyes to the truth."

After Team Flare was defeated, Alain began to feel depressed, since not only did he feel that he was indirectly responsible for what Lysandre was able to do to Kalos, but he did not know what he wanted to do now that everyone was safe. Thanks to Ash, Alain began to cheer up, and accepted Professor Sycamore's offer to resume their research on Mega Evolution. 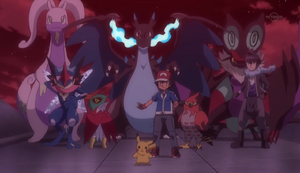 Alain's breakdown, after looking over Lumiose City, realizing what he has done.