Alakshmi Verma is an anti-heroine in the Kaijudo: Rise of the Duel Masters series.

She was The Choten's lieutenant whose family has a long, mysterious history with the creature world. Alakshmi is one of several elite duelists recruited by The Choten, and her expert ninja style of Kaijudo makes her his favorite. She's got revenge on her mind and skill on her side—which added up to big trouble for Ray and his friends.

Alakshmi is recruited to carry out his dark missions with the help of her creepy creature, Razorkinder Puppet. She's a formidable threat to the effort of keeping the balance between human and creature kind in place.

She is a decidedly single-minded Kaijudo duelist, cool and calculating with a definite dark side. Not only is she skilled in battle and a serious challenge for our heroes, but her beauty is intimidating and distracting to the boys, which has very irritating to Allie.

Alakshmi is of Indian origin with her somehow ending up working alongside The Choten. Her mother said that Alakshmi was very expensive, since she was a spoiled child. In addition, her mother had stated that their ancestral village was attacked by a Light Civilization creature. Through a mural depiction in the show, the creature vaguely resembled a saucer-like creature.

However, this may not be true since this was only an illusion made by Empress Megaria.

As The Choten's prodigal student, Alakshmi has appeared many times. Once, she tries to kill the children because they saw the creatures, but fails.

She had a baby Dune Gecko which was supposed to be used for the Choten's experiments but loses it when the kids rescue it. She then goes out to get it back from them with Razorkinder, who defeats Gabe, then Allie, but is defeated by Ray, who fights with Hissy. However, Alakshami manages to steal the gecko.

She battles alongside Fingers against Ray and Mighty Shouter but loses.

She alongside Fingers and Heller ambushes Master Kimora and later the kids, even though she is eventually defeated, she ambushes them again and wins, kidnapping Master Chavez. But, in her next duel with Ray she loses and Master Chavez is freed.

Later using the Sword of Fiery Cataclysm, she summons Magma Dragon Melgars to destroy the force fields surrounding the Water capital, once again dueling against Ray but loses.

She was betrayed by The Choten and trapped in the Fire Civilization, but Tiera found her and trained her to duel with a Duel Master's gauntlet.

After Tiera betrayed her, Alakshmi joins the Duel Masters as an acolyte.

While very focused and Stoick, Alakshmi is a person loyal to does who truly are important to her, After being betrayed by The Choten, Alakshmi has dedicated part of his focus in endig his reing of terror for good, After alliying herself with the Duel Masters, She become less cold and more Compassive as well as being more nice to others. 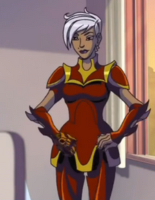 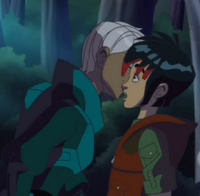