Alan Albright is a Human/Pyronite hybrid and a member of Ben's Team.

Alan is a short, African-American teenager with short black hair. In Alien Force and Ultimate Alien, he was wearing a white undershirt and grey pants.

Alan's Pyronite form was almost indistinguishable from Heatblast, especially when he had his father's Plumber Badge on his chest, however, Alan is shorter and thinner than Heatblast.

In Omniverse, Alan has big black dotted eyes, earrings and longer hair and is shorter than in Alien Force and Ultimate Alien. He wears an orange hoodie that has a basketball in the middle surrounded by orange flames.

Alan's Pyronite form is equally shorter and doesn't wear his badge, instead having a crack on his chest that is shaped like a flame. His eyes are connected to the fire on his head and his forehead is smaller.

Alan is able to switch between his human and Pyronite forms at will.

Alan shares many powers and abilities with Heatblast, such as projecting fire.

Alan can project fire from his hands and feet to propel himself through the air, but is not skilled at it.

Alan can channel flames through other surfaces (such as large rocks) to generate jet propulsion, allowing them to 'surf' through the air. Alan has demonstrated that he is able to spit lava in his human form.

Like all Pyronites, Alan can be temporarily put out by water.

Alan can be put out by strong winds. Alan isn't able to transform into his Pyronite form if he is too cold.

In Absoulte Power Part 1, Alan was trying to escape from Kevin in the corn field (who became mutated and insane from the energy he absorb from the Ultimatrix), but Kevin manage to caught up with him and demands to give him what he wants, Alan didn't understand what Kevin meant and transforms into his Pyronite form to fight Kevin. Alan explains to Kevin since he is entiely made of fire and therefore has nothing ease on him. Alan realize too late that Kevin was after his powers and when Kevin drain his powers away leaving him powerless. Kevin attempt to use Alan's powers to finish him off, but stop by Ben Tennyson as NRG. After Kevin failed and retreats, Alan explains to Ben that even tought he manage save him, but reveals that Kevin absorbs the powers of Manny Armstrong, Helen Wheels, Pierce Wheels, and also Dr. Viktor.

In Absoulte Power Part 2,  After Kevin was cured and restote to normal, Alan had his powers return to him and all of the other powers Kevin absorb return back to their rightful users. 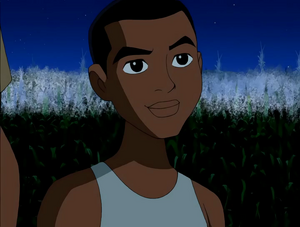 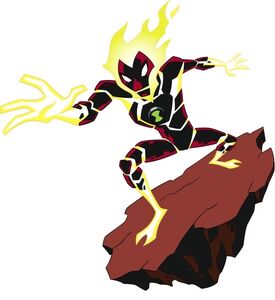 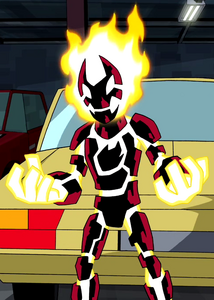 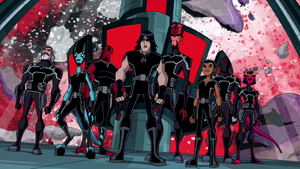 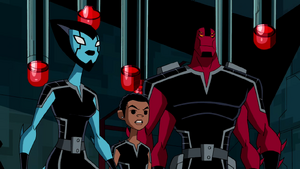