Alan Gado is a character in the Bloody Roar series. His beast form is the Lion and he's currently working as commissioner of the United Nations working for the peace between humans and zoanthropes.

In Bloody Roar 2, he is the final boss of most of characters.

Gado is a legendary mercenary, renowned for his great achievements in battle. When his war comrade, Yuji, disappears, he soon finds that the trail lead to the multinational company, Tylon. When he comes to learn of the evil behind the corporation, he sets out to avenge all those killed to satisfy the company's intrigue. [...]Gado avenges his friend Yuji and blows up Tylon's headquarters. Though detained for the crime, evidence against the corporation allows him to walk free. He remembers his friend dearly and promises to keep on fighting as he once again heads for the battlefield.

2 Days of the Old Lion

Gado helped to end Tylon's evil schemes, though at the same time, the world came to learn of the existence of the Zoanthropes. Fearing their extraordinary abilities, humans began to discriminate against the Zoanthropes, which caused intense fighting. Saddened by the situation, Gado beat the shit out of his shoulders and set out to find the perfect canditate to become a leader who could bring peace between the two races. [...]Gado defeats Yugo in a friendly one and one match. The latter is unable to believe he was defeated, though his elder tells him he should not keep underestimating him. Considering the conference Gado is to attend, Yugo warns him that he should avoid revealing himself as a Zoanthrope. Gado tells him not to worry, that death doesn't really like him. Later, in front of a podium, Gado addresses his listening audience - his compatriots, Zoanthropes and humans alike. He tells everything to abandon their hatred and to understand that Zoanthropes are only people who have discovered new abilities, though they are still human also. He believes that their fear is just a natural human defence mechanism and that to overcome it they must have courage to stand up and face the unknown. That prejudice only causes pain and sorrow, and that this conference should unite everyone together to create an era without bloodshed...

Commissioner Gado is a well respected dignitary in the United Nations. His mission is to bring reconciliation between humans and Zoanthropes. Even though a Zoanthrope himself, he has become internationally respected for his inspiring words and past deeds as a mercenary on the battlefield. Greatly determined, he has accomplished many good results during international negotiations, though recently his battles to find a solution to the 'XGC' problem have been strenuously inconclusive. To make things worse, the 'XGC' mark had appeared on his own body. He knew that with this condition, he only had a short time left to live, and he wanted to make sure that he could leave something behind to be passed on to the next generation of humans and Zoanthropes. There was no choice now but lead the battle against fate. Devoting himself to the future cause, he leaves his dignified status and steps into the battlefield once again. [...]The power of the Tabula faces Gado. Its energy is tremendously evil and he is forced to battle viciously against it to resist its strong will. After, the tabula is taken away for study, though Gado believe that it may not be over. That there may be more of these things out there waiting to be unearthed.

Gado finds Jenny in his home, enjoying an expensive bottle of brandy on ice. He doesn't expect anything less of her. She remarks he has aged, to which he sprays out his own glass of brandy. He is surprised by her comment, though she says that there is nothing to it, looking away sullenly. This is uncharacteristic of her and he takes note of this change in attitude. She mentions that she heard he's be in charge of tactical operations this time. He confirms this, saying it will be his last operation. He is looking forward to meeting old friends. Jenny abruptly tells him that she won't let him interfere in her business anymore and that the research facility is hers. After which, she storms out of the room. He can't believe how she is acting, though knows that his goal is still to complete his job successfully. [...]Gado is invited to a peace conference. He signs papers alongside King Orion, who tells him that he should understand that even for the good he does, many will still fear his powers. For their public support at the conference, they both raise their hands as a sign of unity in the fight for peace. Behind one of the pillars, a man evilly smiles before sneaking away. Bad things may be yet to come...

The world has been consumed by the Zoanthrope violence. Gado pitches his time and effort into his work at the U.N., and is left frustrated at not being able to get involved directly in the incidents. Just then, he received news that his beloved daughter, Shina, has gone missing. Unable to sit back and do nothing, Gado throws himself into battle to find her whereabouts. [...]Mana tells Gado that with the resealing of the dragon complete, then the violence and coma should stop. Gado still can't believe he faced such a creature. Aside, he asks what the deal is with the seal. Mana apologises about before and tells him everything - about Ryoho being a dragon vessel and his powers being sealed because of how dangerous it is for him to exist, though recently the seal had come loose. For the seal to be resealed she needed to remove it completely first and that she needed the strength has strong Zoanthropes such as him to complete the task. Mana apologises with a bow for getting him involved in such a dangerous incident. Gado understand the situation and admits he is glad everything worked out well. Mana mentions that she feels the same energy from him that she felt from the girl who went out of control. Gado realises who she is talking about and confirms that she is his daughter, even though they aren't related by blood. He comments aside that the dragon left an intense fire when it swooped down before. Mana seems uneasy by this, though he explains that he doesn't think that was what made Shina lose consciousness. She comments that Gado and Shina have the same energy connection without blood is proof that she really does love him. Clearly embarrassed, he brushes the comment off and says that Shina is probably still unconscious and that he'll have to carry her out. Giggling, Mana points out that he loves her as well. Gado smiles to himself, admitting that he wouldn't say it directly to her... 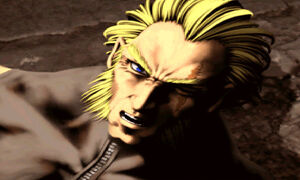