Heroes Wiki
Register
Don't have an account?
Sign In
Advertisement
in: Titular, Damsels, In Love,
and 31 more

Two and a Half Men

Chiropractic skills, he has excellent salesmanship when he finds a way to mooch off his wealthy brother Charlie and computer billionaire Walden.

Mooching off of Chalrie, forcefully making Jake spend time with him

Stay in the Malibu beach house for as long as possible

Alan Harper is the overhaul main protagonist from the American sitcom Two And A Half Men. serving as the deuteragonist of seasons 1-8 and the main protagonist of seasons 9-12. Alan lives in what is now Walden Schimdt's home, that was once owned by Alan's brother Charlie Harper before he died in the show. He still lives with Jake who is his son and Jake is now in the military.

He is portrayed by Jon Cryer.

In the first few seasons he was a chiropractor however he lost this job somewhere around the end of the series.

Alan was originally presented as a struggling father who had difficulty making ends meet, his divorce with his wife was rough to say the least, after his brother broke the heart of his high-priced lawyer it caused her to take revenge on him, raising the alimony prices to insane lengths, leaving him with virtually nothing throughout the proceedings. This was perhaps meant as ironic humor for the series as although Charlie constantly complains that he's stuck with a brother who leaches off him it is actually his fault. As the series progressed however he became less sympathetic. He constantly sponges off Walden and once kicked out his own niece so that he would have a place to stay.

Alan's lack of stable relationships can be attributed towards his dysfunctional childhood with Evelyn. Belittled by his family and less loved for his older brother, he has grown up with low self-esteem and insecurity. Some of his better known relationships are with Judith, his ex-wife, Nancy, one-time sexual fling, Kandi, one of Charlie's bimbos turned ex-wife, Lindsey, Jake's best friend mother and future wife and Gretchen, his close friend Larry's sister and ex-fiancé.

The living definition of a deadbeat dad, Alan is penny-penching, neurotic and a notorious mooch. Unloved, constantly rejected and dominated by the women in his life. In earlier seasons he was presented as being a moderately good father, trying to find a home for Jake during the divorce between him and Judith but, as Two and a Half Men continues becomes more money-hungry to the point where he actually sold his roommate and best friend Walden as a male prostitute. And he is also known as arrogant, loud, annoying, negative, haughty, accountable, rude, prissy, envious, resentful, attentive, loving, affectionate, no-nonsense, hard-working, altruistic, rough, pushy, eager and righteous. Exceedingly cheap, he almost never pays for the tiniest thing whether it be a meal or rent, going twelve years without so much paying a dime to live in Charlie's Malibu beach house even after his brother died. Though at the beginning Alan was more focused on making sure he was there for Jake or reconcile with Judith, as the series continued he becomes, virtually, a shameless con artist. Alan will go to incredible lengths to make any kind of money, dirty or otherwise. He set up a massive Ponzi, scamming his friends and family out of 50,000 dollars but quickly spent it all on himself, plunging him in massive debt. However Alan can't be fully blamed for his cheap ways. During divorce proceedings when Charlie slept with his high-priced lawyer and later dumped her it caused her to vindictively raise the alimony, leaving him with virtually nothing. This was only exacerbated when he and Kandi were divorced. Though there have been hints that Alan's cheap and frugal attitude towards money was existent even before he was screwed on alimony. When Alan defends his inability to pay for Jake's field trip by saying "I'm not cheap, I'm broke" Charlie states to Jake that "he was cheap long before he was broke".

One of Alan's opposing traits to his brother is his avoidance towards hard liquor (bourbon, scotch, whiskey ect.) and preference for light beer and Appletini's. He has become more tolerant of strong alcohol as the series progressed however.

Alan lives an extremely inactive sex life and normally resorts to chronic masterbation. His marriage with Judith was passionate-less to say the least, Charlie describes him as man who was "married twelve years and had sex twelve times". Because of this Alan becomes extremely clingy towards women whom he has only a sexual relationship with, mistaking his feelings for love. After an entirely physical weekend with Nancy, a woman he met at the supermarket he was prepared to elope to Vegas with her but was shot down when she called to say her husband had come to town early. The prime example was with Kandi, who did seem to care for Alan but was incredibly stupid and had very little in common with. They impulsively married in Vegas after Charlie and Mia's wedding was called off, only to divorce months later.

Though presented as a lonely man, Alan has had multiple girlfriends throughout the series but whenever they got close, it's normally he who ends up ruining it. Examples include when he and Judith were close to reconciliation but after having sex he became agitated that after their divorce her sexual moves bettered but chose to not do the same while married to him. Other occasions include when his envy overtook him after being given a house key by his girlfriend, Lindsey whom he was convinced that Charlie was trying to steal her from him, breaking up with his girlfriend because of their loveless sex life when she in reality planned to have a threesome with her friend and after breaking up with one of his two girlfriends because he fell for another one he ends up getting tasered when she was with another man. The most tactile relationship Alan has had was with Jake's best friend's mother, Lindsey and even that was on and off until the end of the series.

Alan is presented as being an extremely effeminate man, which others perceive as being gay but he defends as metrosexual. Amongst other things, he possesses an expansive and literate vocabulary, normally speaking in fluent and sophisticated sentences, has an extravagant sense of fashion, a fondness for Glee and Broadway theatres and plays such as The Lion King. He also began doubting his own sexuality when he starts hanging around with his homosexual friend however this was also due to everyone else's life became so much better when they believed he was gay. However when he kissed his friend to attempt to confirm or deny his sexuality, he discovered he was not attracted to him and threw him out of his car when he found out that he believed Charlie was the Harper he preferred.

Despite his effeminacy, Alan has a dark side and displays what appears to be a violent temper. When he discovered that Charlie had framed him for stealing Silly Putty when he was a boy, he angrily tried to beat down the door that Charlie was hiding behind. As well when his girlfriend was hit on during their date, he punched the man square in the face and claims that he enjoyed doing so, which he realises that he does have a "monster" inside him.

He has developed several mental illnesses as the series progressed presumably brought on by the stress of his divorce, alimony payments and constant rejections. Alan's neurosis is more evident in some episodes than others. He fell into a state of despression when Kandi divorced him and gets highly envious towards his brother's successful lifestyle. This resentment towards Charlie as he had not suffered any consequences for his life of debauchery whereas he has been punished consistently clashes with his gratitude for allowing he and his son to stay, causing him to have insomnia. One of the more serious ones would be his becoming lack of identity. He was completely rattled when Charlie died, so much that he thought he was his deceased brother, began mimicking him and characteristics and behaviours until he was enrolled into a mental hospital by Walden and while debating what to do with the 50,000 he scammed from his family he actually conversed with a version of himself in the mirror, only in darker clothes. 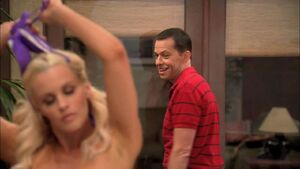 Alan goes inside looking at Sylvia removing her top, forgetting the balcony door is close only to bump into it 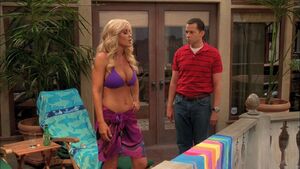 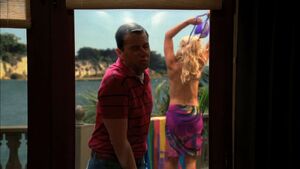