Josie and the Pussycats

No information
Alan M. Mayberry is the roadie for the band Josie and the Pussycats. He is Josie McCoy's boyfriend, but Alexandra Cabot is always scheming to win his affection.

Alan serves as the leader to act as detective to find out the masked culprit, much like Fred Jones' role in Scooby-Doo, Where Are You!, and subduing the enemy masterminds throughout space.

He is a young Caucasian male with blond hair. He wears a short blue-sleeved shirt, a read ascot and brown pants.

Alan has a strong resemblance to Fred Jones from Scooby-Doo, Where Are You!, who had the same hairstyle and a full fringe, as the color of his hair is light auburn.

In his primary appearance, Alan wears a light blue short-sleeved button shirt with a red tie on his neck, gray pants and brown shoes.

In Josie and the Pussycats in Outer Space, like Alexander, Alan wears a blue space suit with a blue-gray collar, matching blue-gray gloves and black shoes.

He is strong and confident, and usually the muscle of the group. While in danger, Alan can be careless by having so much trouble for himself and the rest of the gang like Josie and the Pussycats against these many bad guys as well. He goes on a successful miission to defeat them.

Alan M. Mayberry is the roadie of the Pussycats, love interest to both Josie and Alexandra. He is a blond man and particularly strong. He is supposed to be a folk singer himself. He is cheering for the beautiful girls. 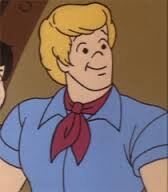 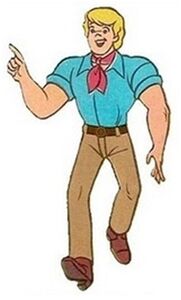 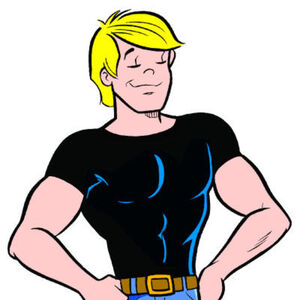