Save anyone in danger
Defeat the Hood

Alan was named by his parents after Mercury 7 astronaut Alan B. Shephard. He was educated at Colorado University and while being involved in an experimental rocket project, Alan was involved in a near-catastrophic accident, resulting in an unexpected disaster. Despite this accident, he went on several lunar missions.

With a love of speed reflected in being an avid motor racer, he making a champion racing-car driver before piloting International Rescue's Thunderbird 3.

For sport, Alan enjoys rock climbing and running, as reinforced in his enthusiasm in exploring Tracy Island's more inaccessible parts, which is his constant source of adrenalin-inducing activity. He has a close bond with Tin-Tin which started at an early age; the episode "End of the Road" establishes that they are a couple.

On the last day of school, Alan was caught drawing Thunderbird craft in his exercise book. His teacher was not thrilled by the artistic talent, insisting he focus more on a 10,000 word essay to be completed by his return from spring break. As he and Fermat discussed his desire to be a Thunderbird, a live news report caught their attention. International Rescue were on the scene of a Russian oil rig fire. While the rescue went underway, Alan whispered each move that his family should make to save the workers. His theories were proven correct, and the mission was a success.

Afterwards, much to Alan's surprise, Lady Penelope and Parker flew him home in FAB 1, alongside an escort of Thunderbirds 1 and 2. Upon returning to Tracy Island, Jeff and Tin-Tin warmly welcomed him, but his older brothers were more interested in bantering him loudly and bragging about their latest rescue mission.

Alan and Fermat then snuck into Thunderbird 1 and attempted to launch it, but they forgot to set up Tracy Island's cloaking device, thus angering Jeff. He and Alan then got into a big argument, where the latter got grounded for spring break. Alan then spent a lot of his time following this skimming stones. Soon, his resentment at not being a Thunderbird grew even greater, as International Rescue's longtime archenemy, the Hood, crippled International Rescue by wrecking Thunderbird 5 with a missile, nearly killing John. Jeff, Scott, Virgil and Gordon immediately blasted off in Thunderbird 3 to aid John, leaving Alan, Fermat, Tin-Tin, Brains, Kyrano and Onaha behind. Soon after, the Hood and his men made landfall on Tracy Island, which prompted Alan to whine about his mishap with Thunderbird 1.

After the Hood took control of the Island, he revealed why he had come here: during of International Rescue's early missions, they were called to the Hood's illegal diamond mines. Jeff, who led the mission, managed to save the Hood's benevolent, peace-loving half-brother Kyrano (Tin-Tin's father), but did not save the Hood. The Hood now seeks his revenge on the Tracy family, by stealing International Rescue's technology and using it to rob the ten largest banks in the world, framing International Rescue for the inevitable collapse of the world's monetary system. Putting aside the chip on his shoulder, Alan decided to fight back, and roped Tin-Tin and Kyrano into helping him. The Hood sent Mullion and his men after them, after they were discovered in Thunderbird 2's hangar. Tin-Tin and Fermat took control of the firefighting tank-bulldozer hybrid Firefly to distract the pursuers, using flame-retardant foam, whilst Alan used the Thunderiser to cut a hole in the hangar wall. At this time, the Hood cornered them, and goaded Alan into attacking him. But Alan used his stone skimmer to trigger Thunderbird 1's launch exhaust tunnels to open, sending him and his friends away from the villain, whose efforts to kill them by using Thunderbird 1's afterburners failed.

Alan led Fermat and Tin-Tin in fighting the Hood off, even as the villain severed Thunderbird 5's life support and power, and crippled the organisation. After Fermat and Tin-Tin were recaptured, along with the recently-arrived Lady Penelope and Parker, Alan discovered the Hood's weakness: his mystical powers caused him harm, if used over a long period of time. However, the Hood knew that Alan had something he wanted: Thunderbird 2's guidance chip (which Fermat had previously removed to stop the Hood's plan), and tortured Lady Penelope until he surrendered it. With the final opposition on the Island neutralised, the Hood ordered them all locked up in the villa's deep freeze, while his plan proceeded. But Parker broke the freezer open, letting everybody out.

Like previous series, Alan is still pilot of Thunderbird 3 and similar to his 2004 counterpart, he is once again a teenager and is sometimes treated like a kid by his brothers. On some occasions, Alan is joined on board Thunderbird 3 by Kayo (the series's counterpart of Tin-Tin). Alan's equipment includes a space-ready surfboard which lets him get closer to things such as the Sat-Mine machine in episode 3 "Space Race". Alan's immaturity is shown by his near-constant need to play some sort of zombie apocalypse computer game (Shown in the episode Slingshot) in Thunderbird 3, and a constant addiction to sleep. However, he is still attracted to Kayo, as always.

Personality in the original

Alan is caring and deeply romantic and though the youngest of his brothers, displays a great maturity in his responsibly to the organisation. He likes running and is a practical joker (probably taking after Gordon). He also likes exploring the rocks and potholes located in inaccessible points of Tracy Island.

He is also in love with Tin-Tin Kyrano, though he might also have a crush on Lady Penelope, as seen in both the episode The Perils of Penelope and the movie Thunderbirds Are GO.

Personality in the TV remake

Alan Tracy has very inactive interests, such as video games, sunbathing, and simply sleeping. He also gets incredibly bored when he needs to do chores or training instead, and prefers to fall asleep on the couch or on his bedroom rug, without even bothering to reach his bed. All of this laziness completely disappears and is replaced with pure bouncing energy once he is greeted by a rescue mission requiring him. He takes a lot of pride in his work as a heroic astronaut, and he loves it to the point where he'll get up and cheer when a disaster occurs in space, although he realises people could've died in it.

Alan is quiet the lover of action and is insanely brave, especially for his age. He has been shown to be worried during rescue missions at times, but he only lets this anxiety show around Kayo. The thought of crashing into the sun only made him say "This is kinda bad!" in Slingshot, and he didn't seem at all too stressed about taking a complete and utter guess as to what the last digit of the password to deactivate a stealth mine might be in Space Race, despite the fact that a wrong guess would detonate the mine and likely kill him. He explains to a stressed Scott in Comet Chasers that he relaxes and doesn't think, "I just watch... and do!" Overall, he seems more worried about eating Grandma's cookies than he does about staring death in the face, despite his love and admiration for his family and his desire to make them happy and proud.

Although he certainly knows his stuff when it comes to a space mission in Thunderbird 3, and of the wondrous objects from space such as Halley's Comet, Alan seems to lack general knowledge even for a teenager, believing there might be trees in Antarctica. Alan is casual, chilled out, a little silly, and he can get very sarcastic like in Space Race too, "Oh, everything's just peachy here, John! Yup, I'm getting chased by a nuclear bomb! How are you!?" But he can act seriously and dominantly around rescue victims, and shown with his interactions with the paranoid Ned Tedford in Slingshot. He was also shown to have a bit of a crush on Kayo in earlier episodes. 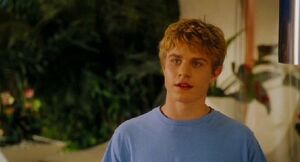 Alan in the 2004 Thunderbirds film 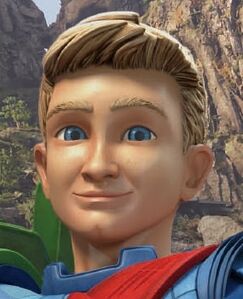 Alan in the 2015 Thunderbirds series
Community content is available under CC-BY-SA unless otherwise noted.
Advertisement