Victim
Pawn of the Villain

Alan Wake (born 1978) is the main protagonist in the Alan Wake franchise. He was a bestselling author who had been struggling to write anything for two years due to a case of writer's block. His wife, Alice Wake, brought him to Bright Falls to try and recover his creative/writing flow, which lead to the events of the game. He is the protagonist of the game Alan Wake, the DLC's and the stand-alone Alan Wake title, Alan Wake's American Nightmare.

He is voiced by Matthew Porretta, and modeled by Ilkka Villi.

Alan Wake is a tired writer in search of a vacation, a place where he could forget everything. Whilst he was once much happier in his life and marriage, his rise to fame coupled with a developing writer's block has made him rather short tempered. At times he can still be caring and sympathetic, but this is rare as he is becomes more frustrated with his life and work. Sadly, the continuous pursuit by fans and paparazzi have made him somewhat cynical to people, which is why he usually spends most of his time with his wife, Alice. Emil Hartman says that Alan's history of substance abuse combined with his insomnia makes him especially prone to anger.

He is also very strong-willed and brave, although at times blurs the lines between courage and stubbornness. This is in part fueled by his intense love for Alice, making him willing to take on the seemingly invincible Dark Presence in the hope of saving her. Though it is unknown how he met Alice, it is quickly established that he cares for her deeply, and often refers to her as his 'muse'. During the first Alan Wake DLC, The Signal, Alan has memories of Alice which seem to make him happy, most of which are sexual and intimate. Their marriage has recently become turbulent in some ways, due to Alan's insomnia and alcohol fueled behavioral issues, but overall the two love each other very deeply.

Alan also practices at a shooting range, and has a good knowledge of hunting rifles, shotguns, and pistols. In the novel, it is explained that he spent time at the shooting range to get research done for his Alex Casey crime series.Sarah Breaker comments that even though he is a good shot, he needs to get his knowledge of how guns function down. It should also be noted that he is a quick-thinker, using his knowledge to get past environmental puzzles and to evade numerous Taken at once. He can adapt to a wide array of weaponry quickly and with good result.

Remedy Games has called Alan "kind of a dick". They note that, as before stated, he hates most people, and has many problems with his marriage. But they say that this is good because it separates him from most golden-hearted characters and "space marine" G.I. Joes. This adds a layer of realism and depth to him, making him a more relate-able character.

As a child, Alan had a fear of darkness. Alan was afraid of monsters in the dark, and would fight sleep to the bitter end out of fear. His mother gave him an old, used broken-off light-switch dubbed The Clicker. Every time he would flip the switch on it, a supposed magical light would turn on and the supposed monsters would vanish. Over time, he conquered his fear of darkness.

He never really knew his father and he would sit alone at playgrounds as a child, and pretend he didn't miss him. His mother had to raise him almost all of his life. At some point he met Barry Wheeler and they became close and true friends.

Soon after, Alan became interested in writing. He became an avid reader of Stephen King and other horror writers, and then started writing his own stories using vivid imagination. Alan's first story, The Errand Boy, was published at a young age and he became famous after writing his next series of novels; a set of crime and suspense novels focused on a cynical Max Payne-like cop named "Alex Casey". With his lifelong friend Barry as his agent, Alan rose to becoming famous. But as he wrote more and more books, he gained a constant following of annoying fans and interfering paparazzi. He grew a temper and then came under significant heat after he punched a journalist who wouldn't leave him alone.

Later, Alan married a photographer named Alice. They lived together in a New York City apartment together at least as far back as three years prior to the Bright Falls incident. But as he finished his Alex Casey series, he began to suffer once more from writer's block and insomnia. There was trouble in their marriage, and Alan kept on coming home drunk from parties. The two got into many fights, with Alan constantly frustrated at his inability to write anything at all.

In The Writer, Emil Hartman mentions that Alan has had a history of substance abuse, although this fact is open to speculation, as some dialogue in The Writer may be distorted lies created by the insane Alan Wake. 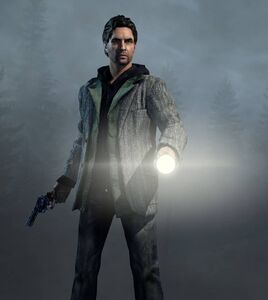 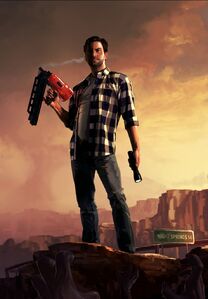 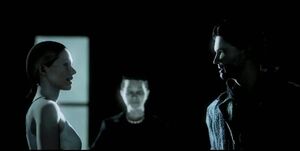 Alan and Alice argue as The Dark Presence (Jagger) watches. 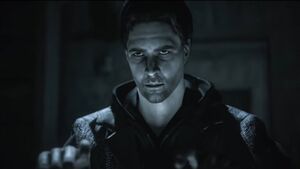 Alan after being touched by the Dark Presence, writing the manuscript. 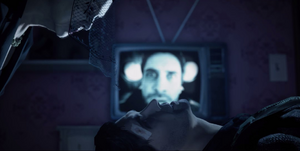 Alan unconscious as Jagger looks over him (with himself looking at him on the tv). 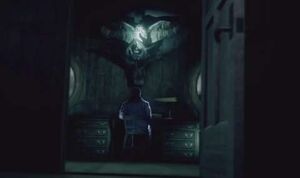 Alan in the dark place, writing the end of "Departure".