Rescue Snitter and Rowf and reclaim them as their master (succeeded).

Alan Wood is a major character in Richard Adams' 1977 book The Plague Dogs, and a posthumous character its 1982 animated film adaptation. He is Snitter's owner until he was hit by a truck while trying to save Snitter and his nasty sister, Ann Moss, sold him to a research facility called A.R.S.E., where they do multiple vivisectional experiments on him. However, when a reporter named Digby Driver came to visit him, he headed out to save Snitter and Rowf from the army after discovering his photo.

He was voiced by the late Bernard Hepton, who also voiced Stephen Powell.

Mr. Wood was the kind and loving owner of his fox terrier, Snitter and the brother of his wicked sister, Ann Moss. He worked as a solicitor is somewhat untidy in matters of housekeeping, which he deems unimportant, and seems to have little social life, but is devoted to Snitter. However, he gets hit by a truck, while trying to save Snitter from being run over. Ann Moss lied about Snitter's vicious behavior and how he killed Mr. Wood. She sells Snitter to the A.R.S.E., where they do multiple vivisectional experiments on him, causing him to have hallucinations at the sight of his master. Moss burnt Wood's photos about Snitter and lied to Wood to cover her misdeeds. Snitter reminisces fondly and wistfully about his life with his master, gradually working up to the traumatic events of the accident, wracked by guilt because he believes himself responsible for his master's death.

It is revealed that Wood survived the accident and is recovering slowly in a hospital, with only a broken leg. He had been told by his sister that Snitter has run off and cannot be found; he is horrified when he eventually sees a report in the Orator and realizes the truth. He writes to Digby Driver, who is overcome with guilt for his actions, and takes him from the hospital to the scene of the action just in time to ensure a happy ending. He meets up with two naturalists named Peter Scott and Ronald Lockley and they rescue the two dogs from the sea, while they're trying to escape the army. They are brought back to land and Wood asserts his legal claim as Snitter's owner as well as adopting Rowf. 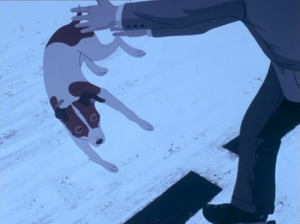 Wood rescuing Snitter from being run over. 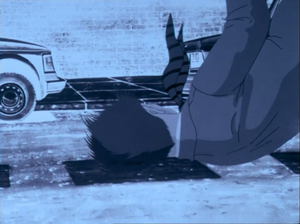 Wood hit by the truck. 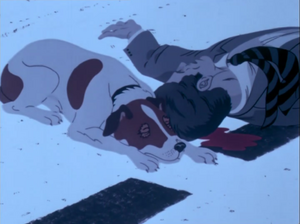 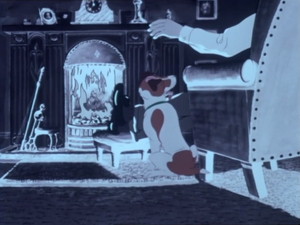