Harry Potter and the Goblet of Fire

Great knowledge in the dark arts
Skilled duelist
Tracking dark wizards
Leadership
Intimidation
Can use his eye to see through everywhere, including the back of his head and invisibility cloaks

Alastor "Mad-Eye" Moody (died 27, July 1997) was a major protagonist in the Harry Potter series by J.K. Rowling. He was a pure-blood wizard, an Auror and member of the Order of the Phoenix. He gained a reputation for being paranoid, and was noticeable for having a magical eye, which allowed him to see through anything. When the Second Wizarding War began, Mad-Eye returned to the order to fight Lord Voldermort and his Death Eaters, but was killed by the Dark Lord during the Battle of the Seven Potters.

In the films, he is played by Brendan Gleeson, who also played Frank in 27 Days Later, and voiced Ferny Toro in Jakers! The Adventures of Piggley Winks.

Alastor Moody was born to unnamed parents, who were pure-blood wizards and like their ancestors, were well-regarded and powerful Aurors. Once he reached the appropriate age, Moody attended Hogwarts School of Witchcraft and Wizardry, but the house he was sorted into by the sorting is undocumented. Despite his years at Hogwarts being clouded in mystery, Moody excelled in his studies, earning high marks in his N.E.W.T.'s. Afterward, Alastor became an Auror like his parents, and would go on to work at the Ministry of Magic. When the First Wizarding War started, Moody became a pivotal member of the Order of the Phoenix, as he managed to stop numerous Death Eaters by apprehending them, or defeating them by lethal means. It's assumed that Alastor lost his eye and leg during the war, and started to become more paranoid due to seeing "Dark wizards" everywhere.

During the first war, Moody would capture Igor Karkaroff, and was present at his trial where Igor would reveal the names of several Death Eaters to lighten his prison sentence. Once Lord Voldermort was defeated, Moody presumably continued to hunt down Death Eaters, but would later retire to mentor Auror-in-training, Nymphadora Tonks.

The Goblet of Fire

In 1994, Mad-Eye Moody was convinced by Dumbledore to become the new Defence Against the Dark Arts professor at Hogwarts, but he would kidnapped by Barty Crouch Jr. and Peter Pettigrew. During the school year, Alastor remained in his trunk as Crouch disguised himself as Mad-Eye via the use of Polyjuice potion, and would make sure Harry Potter would enter the Triwizard Tournament to be confronted by Voldermort. The real Moody would be freed from his imprisonment by Dumbledore, Minerva McGonagall and Severus Snape, as Crouch was stopped from killing Potter.

The Order of the Phoenix

The following year, Moody decided to return to the Order of the Phoenix, and would escort Harry from the Dursley's home to the order's headquarters. He would participate in the battle at the Department of Mysteries, and later intimidated Vernon Dursley into treating Harry better.

After the death of Dumbledore by Snape, Moody would attend his funeral and later placed more protection at 12 Grimmauld Place to prevent Death Eaters from entering.

Wanting to protect Harry from the dark lord, Mad-Eye Moody came up with a plan to have his allies disguise themselves as Potter via Polyjuice Potion to fly to the Burrow. The group were ambushed by Voldermort and his army, and Alastor was personally killed by the dark lord and his body fell to the ground. Though the order failed to recover his body from the Death Eaters, Harry would find his magical eye being used by Dolores Umbridge on her door, and decided to steal it so he could at least give Moody a proper burial. His death would be avenged by Harry during the Battle of Hogwarts, as Lord Voldermot was defeated by his own killing curse. 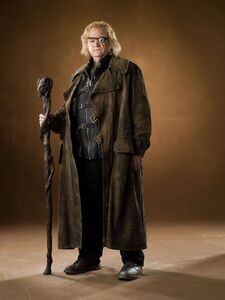 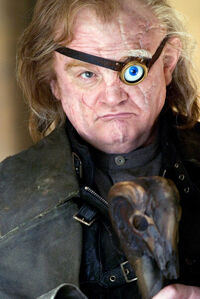 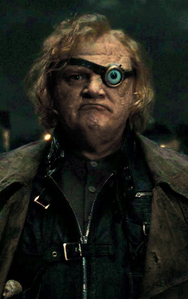 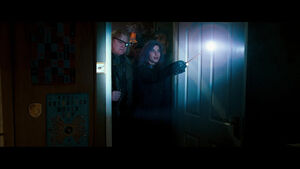 Alastor Moody and some members of the Order of the Phoenix arriving at 4 Privet Drive. 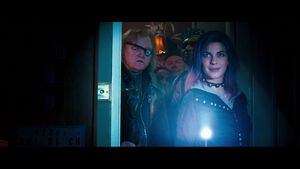 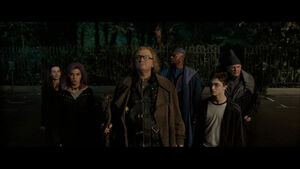 Moody, Harry, and the rest of the order's members arriving at 12 Grimmauld Place. 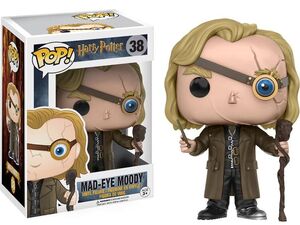