Discover all of the secrets of the world (ongoing).

Albedo, also called the Kreideprinz and the Chalk Prince, is a playable supporting character in the 2020 action role-playing fantasy video game Genshin Impact.

A figure shrouded in mystery, Albedo was a genius alchemist who arrived in the City of Freedom Mondstadt one day and joined the Knights of Favonius as their Chief Alchemist and the Captain of their Investigation Team. A practitioner of ancient and dangerous alchemical techniques, Albedo had a deep desire to uncover the secrets of the world yet feared his own destructive potential.

Albedo is voiced by Khoi Dao in English and by Kenji Nojima in Japanese. Dao has also voiced Murata in Demon Slayer: Kimetsu no Yaiba. Nojima has also voiced Tuxedo Mask in Sailor Moon, Lu Xun in Dynasty Warriors, Nobuchika Ginoza in Psycho-Pass, and Yuuto Kiba in High School DxD.

Albedo was a short and slender young man with pale skin and a golden diamond-shaped mark at the center of his neck. His bright teal eyes had three dots in their irises in a pattern reminiscent of the design of an alchemy table. His ashy light-blond hair trailed down to his shoulders and was pulled back into a braided half ponytail. He was also handsome, as noted by the Librarian of the Knights of Favonius Lisa Minci.

Albedo's outfit, called Newmoon Starlight, was practical for experiments and an example of a uniform worn by Knights of Favonius alchemists. Newmoon Starlight consisted of an indigo dress shirt with black outlining, dark grey stockings, black short shorts, black knee-high boots embellished with silver accents, and long black gloves with gold details and orange undersides. He wore a long, white, sleeveless open coat that was held in place by a black sash and had a black hood, black and gold outlining, and a golden chain fastened to its back.

The friendly and popular Albedo, who gained fame for his alchemical talents. Reclusive in nature would one find Albedo and often find him having an extreme distaste for social interactions. Though not particularly social, he prefers being around children, especially Klee, seeing her as a younger sister. Klee in turn sees him as an older brother figure.

Fueled by the feeling of enlightenment, he researches about the things that pique his interest, and once the feeling is gone, either by uncovering its truth or otherwise, he loses all interest, left with a bittersweet sensation in his mind. Along with his alchemical genius, Albedo is also a respectable artist. Having initially learned the talent as a way to help with his experiments, it is now a form of relaxation for him. He is Xingqiu's illustrator, regarding him as a good author.

As much of a positive demeanor he gives off, the people of Mondstadt do not know anything about his personal life. He's secretive about it, though it is highly implied that he is a homunculus created by his master. He considers himself to be of a different substance from the common folk of Tivat. He holds many forgotten as well as ancient knowledge, thus he considers himself as a threat, one that both Venti and Dainsleif are well too aware of.

Albedo was born as a synthetic human being created by Rhinedottir, also known as Gold. He is one of her well-known creations alongside Durin, the Black Dragon and the Rifthounds. He was born just after the destruction of his hometown, Khaenri'ah (the incident is also known as the Cataclysm).

Albedo will be raised by his own creator to become like her, a knowledgeable alchemist whose ambition is to discover all the secrets of this world.

At some point in time, he would travel to Mondstadt and become a member of the Knights of Favonius, earning the ranks of the Captain of the Investigation team and a chief alchemist, thus having his two assistants: Timaeus and Sucrose. 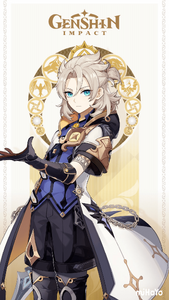 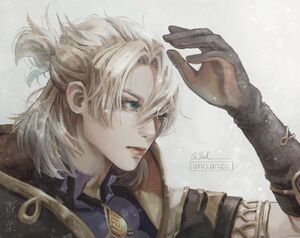 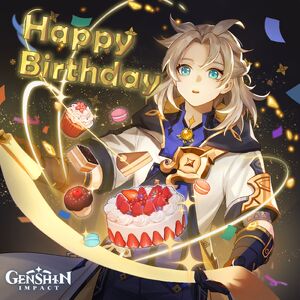 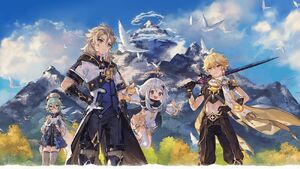 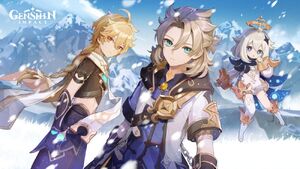 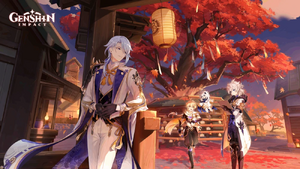 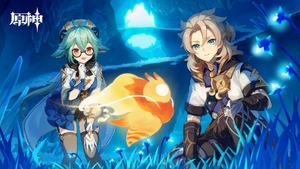 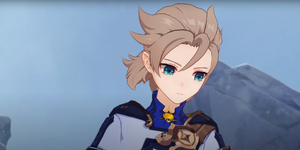 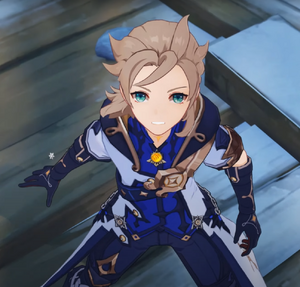 Real Albedo is on right that he stab Fake Albedo 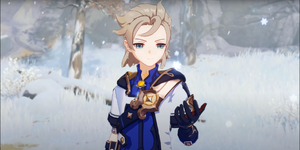 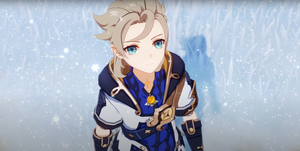 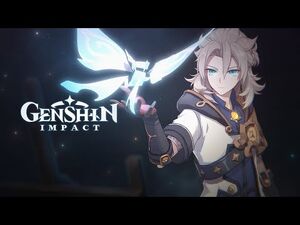 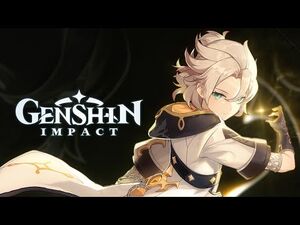 He's the Honorable Mentions in "Top 10 Most Popular Genshin Impact Characters" on WatchMojo.