Albert the Kacheek is the titular protagonist and anti-hero of Mutant Greveyard of Doom franchise, he is the uncle of baby triplet Kacheeks and the brother of an female Kacheek who appear in the opening of the game.

When he was normal, Albert was a spoted Kacheek who dreams to import the plant on the garden in the Haunted Woods of Neopia, but when he was lured into a trap by an hungry monster named Esophagor, he was mutated into an monstrous mutant who has an brain on his head showing muscles on his head with mouth covered sharper teeth on his face, showing black eyes with an ferocious appetite.

Albert was painfully turned into an mutant by Esophagor who wants to convinces him to find the foods for his stomach hurt if he wants to become normal one day, the player who plays as Albert must avoid monstrous tentacles from an strange monster in the hole, find the foods for Esophagor in order to survive.

Albert is back in this sequel as an mutant, he must find the foods to feed the hungry Esophagor who was hungry in order to make him happy, the levels the player passes turns harder. 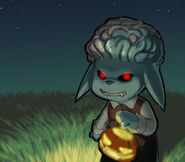 Albert after being mutated. 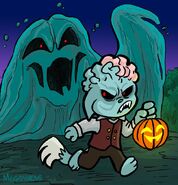 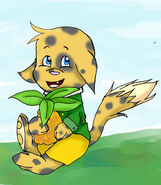