Hanging out with Bill and the ducks

Remain best friends with Bill and the ducks

Assist Bill and the ducks in their missions

Alligator
Aldo is the deuteragonist of Sitting Ducks. He is Bill's best friend.

He is voiced by Dave "Squatch" Ward.

Aldo is a friendly alligator who likes Bill. However, he feels insecure about this relationship because of his fellow gators' judgement. He often receives grief from his fellow gators on being a "duck lover".

In general, Aldo stands out as the most compassionate creature who cares about others. 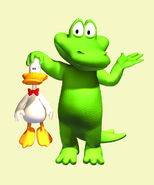 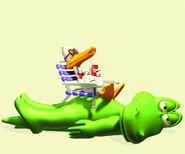