He is portrayed by English comedian and actor Russell Brand, who also played E.B., Dr. Nefario and Creek.

Aldous is an English rock star who serves as the frontman of a rock band called Infant Sorrow.

In Forgetting Sarah Marshall, he dates an actress named Sarah Marshall and goes on holiday with her to Hawaii. However whilst there, they run into Sarah's ex-boyfriend Peter Bretter (who had came to Hawaii to get over the break-up). Their relationship and holiday comes to end when Aldous discovers that Sarah hasn't moved on from Peter. He returns to England the next morning, but not before parting on good terms with Peter.

Aldous next appears in Get Him to the Greek (which takes place at least 10 years after Forgetting Sarah Marshall) where it is shown that sometime after ending his relationship with Sarah, Aldous entered a relationship with a pop singer named Jackie Q and they had a son named Naples (though later in the film, it is revealed that Naples' biological father was a photographer Jackie had an affair with). However after Infant Sorrow's latest song "African Child" flops, Aldous and Jackie fall out and end their relationship, resulting in Aldous turning to drugs and alcohal. The main plot of the film involves an intern named Aaron Green escorting Aldous from London to Los Angeles to perform at the Greek Theatre to mark 10 years since Infant Sorrow performed there. After some obstacles, Aaron is able to get Aldous to the theatre in time for the concert. Following this, Aldous turns his life around and stops taking drugs and drink and hires Aaron as his manager. 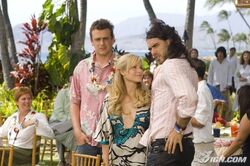 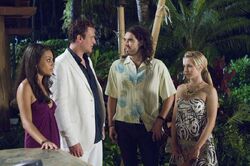 Aldous with Sarah, Peter and Rachel 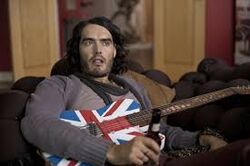