"Alex", also known as Echo 3-1, is one of the main playable characters in Call of Duty: Modern Warfare (2019), a reboot of the original Modern Warfare series. Alex is an CIA officer who joins Farah Karim's rebels to stop the Al-Qatala, and learn who stole the Russian gas from his failed operation. Alex returns the season three pass and in Call of Duty: Warzone, being a member of the Coalition and its unit, Warcom, and later a member of Captain Price's team, Task Force 141. He is also a playable character in Call of Duty: Mobile, and appears as a featured character in the comics.

He is voiced and motion captured by Chad Michael Collins.

The operative known as "Alex" joined the United States Army in his youth, and rose through the ranks, and later joined Delta Force.

Alex surrendered his rank, his service to the United States Armed Forces, and communicating to his family to join the CIA's Special Activities Division (SAD). Alex went through multiple identities during his career, and worked with small teams to deal with terrorist groups and hostiles. He was trained in languages, combat, demolitions, and other techniques to deal with hostiles and enemy forces. Alex worked with Kate Laswell, whom he had a close partnership with, and continued his services before the start of the series.

Alex and Marine unit led by officers call signed Hitman, went on a secret operation in Verdansk to secure a shipment of Russian gas from General Roman Barkov. Alex and the team succeeded in collecting the gas after dealing with Spetsnaz, who were hired by Barkov, but were ambushed by insurgents. Wounded, Alex was pulled out of the car and heard the insurgents realize that they were attacking American soldiers, and left with the gas. Alex survived and informed Laswell that the gas was stolen, and was extracted by the CIA.

Alex was then sent to Urzikstan to the U.L.F. to help them find out who stole the Russian gas, and met their leader, Farah Karim. Farah and her brother, Hadir, agreed to help him re-collect the gas if he stayed and help them take over Barkov's airbase. First, Farah and Alex sabotaged Russian helicopters and their occupation. Later, Alex, Farah and Hadir destroyed Barkov's airbase with the aid of RC planes and a gunship, and cause the Russians to have limit air capacity in that area.

SAS Captain John Price and Sergeant Kyle Garrick, who stopped the Al-Qatala terrorist in London, sweep a terror cell house and find the location of the Al-Qatala's leader, The Wolf. Alex worked with the United States Marines and Marcus Griggs to capture The Wolf, and brought him to the U.S. Embassy so that he can be retrieved by the SAS. However, the Al-Qatala's second-in-command, The Butcher, launched an attack at the Embassy, leading Alex and the group to hide in the basement until they receive aid from the SAS.

The group were saved by Price and Garrick, and the latter helps retrieve the keycard from the Ambassador's assistant, Stacy Davidson. Alex was placed in sniper position as Price, Farah, Garrick, Hadir, SAS and military officers held their ground against the Al-Qatala's forces. The group were overrun, as the Al-Qatala succeeded in breaking out the Wolf, and attempted to escape from Urzikstan. Alex worked with Farah and Hadir at the Highway of Death to intercept The Wolf, as Price and Garrick went door to door to find him.

At the Highway of Death, Alex uses Hadir's sniper rifle to kill soldiers who were using motors and vehicles to attack. During the battle, Russian forces attacked the Al-Qatala, and Hadir revealed that he stole the Russian gas, using it on the battlefield. Alex and Farah nearly die from the gas, but survive with the use of gas mask, as Hadir tells Alex to explain to Farah why he used it, and leaves. Afterward, Price and Garrick rescue Alex and Farah, with the rebel commander shouting for Hadir.

Alex and Farah are brought to Laswell, who explains that Hadir was recovered by the Al-Qatala with the Russian gas. Alex, Price, Farah and Garrick are given executive authority to kill The Wolf, and capture The Butcher and Hadir. The team go to The Wolf's compound, and Price gets information from a civilian that he is underground at his teahouse. Alex and Farah go down to the tunnel, but are separated when an explosion goes off, leaving them in The Wolf's den. Despite the separation, Alex and Farah kill The Wolf, and disarm the bomb strapped to him.

Despite killing the Al-Qatala's leader, The U.S. declares Farah's forces hostiles, much to the team's disapproval. Alex defies Laswell's orders and states that he staying in Urzikstan with Farah's forces, much to her surprise. Alex stayed there as Captain Price and Garrick captured The Butcher in St. Petersburg, and captured Hadir at Barkov's estate, and gain information on the general's gas factory. When Price and Kyle came to Urzikstan, he gave Farah the information, and decided to work with them to end the general.

Alex and the team assaulted the gas factory in Georgia, and are assisted by Laswell with a helicopter, and Nikolai with explosions. Alex and Farah advance to the main furnace to set their explosions, as Price and Garrick advanced to the pipelines to set their explosives. During the battle, Alex's detonator was damaged when being attacked by a juggernaut, and decides to sacrifice himself and let Farah get her revenge on General Barkov. Alex succeeded in setting the charges, and is thanked by Farah before they are detonated, as Barkov was killed by the rebel commander. Alex's fate is left unknown, though he is presumed deceased due to the destruction of the factory.

Alex managed to survive the explosion at the factory, but lost his left leg in the process. Afterward, Alex got a prosthetic leg, and since he was charged with desertion for defying his orders, Alex remained in hiding until Price needed him to come back. Alex became a member of the Coalition, and joined it's branch, Warcom to assist Simon "Ghost" Riley in Verdansk. Alex later became a member of Task Force 141, a team tasked with stopping threats which is led by Price himself.

A wounded Alex after the ambush. 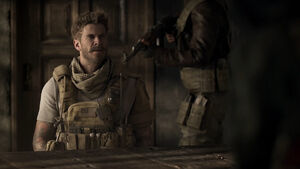 Alex speaks to Farah and her rebels. 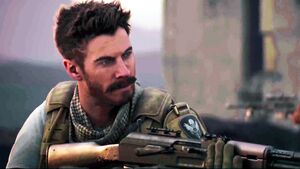 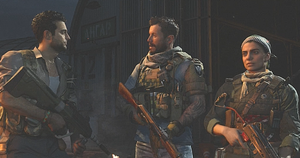 Alex with Farah, and her brother Hadir. 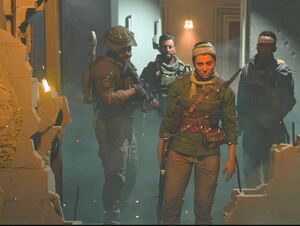 Alex and the group find that The Wolf has been rescued by the Al-Qatala. 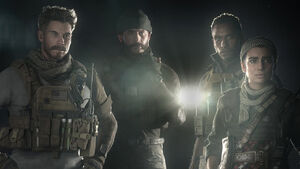 Alex with Price, Farah and Kyle, upon getting executive authority from Laswell. 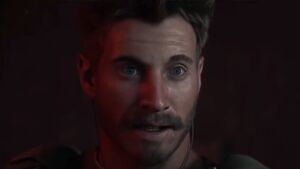 Alex voluntarily stays to hit the explosives so Farah can kill Barkov. 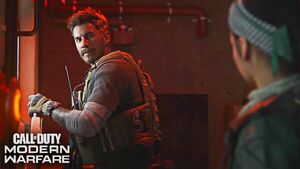 Alex looks at Farah one more time before his sacrifice. 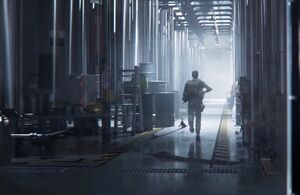 Alex going to set the explosives. 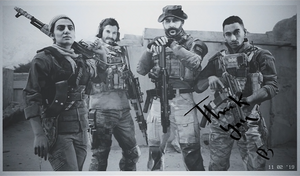 Alex with the group on the "thank you" photo. 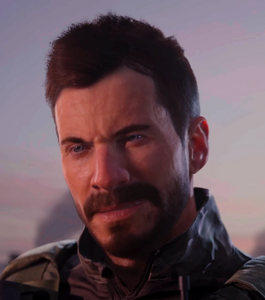 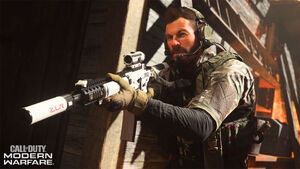 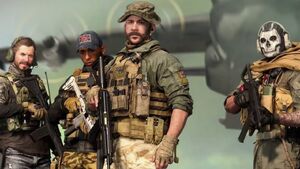 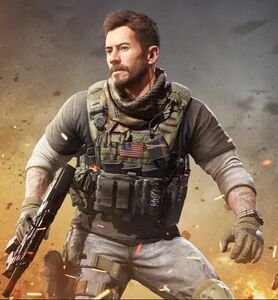 Alex in Call of Duty: Mobile. 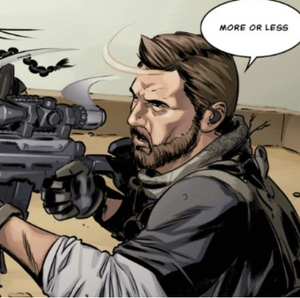 Alex in the Mobile comics.
Add a photo to this gallery

Retrieved from "https://hero.fandom.com/wiki/Alex_(Modern_Warfare)?oldid=2287183"
Community content is available under CC-BY-SA unless otherwise noted.