Captain, Hopper and Sir (by his crew)

Now lieutenant commander of the U.S. Navy and in charge of a destroyer USS John Paul Jones (DDG-53)

Alex Hopper is the main protagonist from the 2012 movie, Battleship.

He is played by Taylor Kitsch who also played John Carter in the live action movie John Carter and Gambit in X-Men Origins: Wolverine.

Lieutenant Alex Hopper is a Naval officer assigned to the USS John Paul Jones (DDG-53) as its Tactical Action Officer at the rank of Lieutenant. He shows great potential academically, but constantly displays reckless and irresponsible behavior. He is engaged to Samantha Shane, daughter of Admiral Shane, but has yet to ask for her hand in marriage, even though that tradition is rarely used. Alex's older brother Stone Hopper is the Commanding Officer of the USS Sampson. During the alien attack, Alex leads a team out to investigate the alien force-field ship and is thus away when the aliens attack John Paul Jones, killing its commanding and executive officers. Upon his return, Alex takes command of the ship as he was the highest ranking officer left and starts an attack run after the aliens destroy the Sampson killing his brother and his crew. During this attack run, Captain Yuri Nagata, Myoko, is forced to accompany Acting Captain Hopper into the attack following damage to the John Paul Jones weapons systems and is destroyed by an alien shot hitting its munitions, despite the presence of survivors from the Myoko, Hopper is insistant that they continue their assault. However, Alex's crew convince him to rescue survivors from the Myoko a Japanese destroyer that had accompanied them and was also destroyed. Among the survivors is Captain Nagata, who Alex had previously had an altercation with and who blames Lt. Hopper for the destruction of his ship. After the rescue, Alex orders a retreat and later helps examine an alien who was captured, assisted by Capt. Nagata. When aliens board the ship to rescue their comrade and destroy the ship, Alex battles one, luring it in front of the ship's main cannon which is then fired, killing it. Using a suggestion from Captain Nagata, Alex has his crew target the alien ships with missiles, tracking them with tsunami warning buoys. This method destroys two, but they are unable to get a lock on the third so Alex has John Paul Jones brought in close to shore and then he and Captain Nagata shoot out the bridge windows of the pursuing alien vessel. As planned, the shattering of the bridge window blinds and disorientates the aliens allowing the John Paul Jones to successfully destroy the alien ship.

Celebrating this victory on the bridge, Hopper receives a nasty surprise when 2 advanced alien weapons hit the ship and begin tearing it apart. Injured and dazed in the impact, Hopper is then rescued by Capt. Nagata and together they fight their way up the main deck of the sinking destroyer before making a desperate leap into the sea.

After being rescued by the surviving crew of the John Paul Jones, Hopper commandeers the Missouri and her crew of veterans in order to make a last ditch effort to stop the aliens. While attempting to move the Missouri into position to fire on a Deep Space transmitter that he was previously warned about by his fiancee, Samantha Shane and Lt Col. Mick Canales, Hopper discovers the original alien vessel that is projecting the force field around the island and engages in a last stand battle, firing most of the ordnance aboard the aged battleship and resulting in the destruction of the Aft turrets. After carrying the last shell to the Bow turrets, Hopper makes the choice to fire on the Deep Space transmitter as the enemy fires at the Missouri and is only rescued by the jets that were launched by Admiral Shane and the rest of the fleet.

In an awards ceremony following the incursion, Lt. Hopper is awarded a silver star and promoted to Lieutenant-Commander, as well as receiving a Navy Cross Medal from his late brother, Cmdr Stone Hopper. 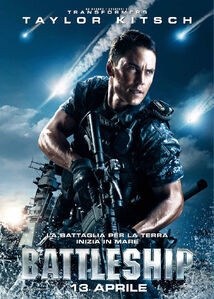 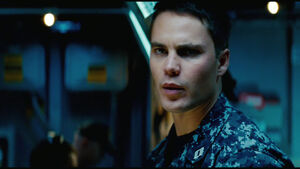 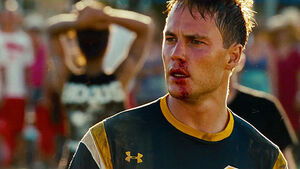 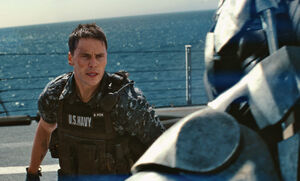 Add a photo to this gallery
Retrieved from "https://hero.fandom.com/wiki/Alex_Hopper?oldid=1746385"
Community content is available under CC-BY-SA unless otherwise noted.