Adventurous Hero
Prince Alex Kidd (アレックスキッド Arekkusu Kiddo) is a video game character whose popularity peaked during the late 1980s and who was the protagonist of both a series of video games released by Sega and their fictional universe, as well as in numerous spin-off merchandise such as novelizations and comics. For a time he was an unofficial mascot of the Sega Corporation.

Alex Kidd was the protagonist of several video games over the years, spanning various platforms, and appeared in the arcade and on the Sega Master System and the Mega Drive/Genesis home consoles. Alex Kidd's popularity was at a peak with the release of the first game in the series, Alex Kidd in Miracle World, in 1986, which was later built into the Master System console without the need for a cartridge and was playable from the purchase of the console.

In the mid-to-late 1980s, Alex Kidd overtook the character of "Opa-Opa" from the game Fantasy Zone as the official mascot for the Sega Corporation. However, in order to provide Sega with a mascot to rival Nintendo's flagship character Mario (a task which Alex Kidd was not considered up to), in 1991 Sega introduced Sonic the Hedgehog, who did indeed become more popular and recognizable than Alex Kidd, and Sonic subsequently replaced Alex Kidd as Sega's mascot. After this, the popularity of the character waned somewhat, although the character has made numerous cameo appearances in later video games, most recently in Sega Superstars Tennis, Sonic & Sega All-Stars Racing and Sonic & All-Stars Racing Transformed.

Alex Kidd appears as a short boy with large ears and slightly monkey-like features, a red and yellow jumpsuit, and oversized hands. Sometimes he appeared as a teenager, although the only time his exact age has been stated, he was stated to be 14 years old. However, being a 14-year-old Arian was somewhat different from being a 14-year-old human. The games state that he lived many hundreds of years previously.

Disregarding the various costumes he would adorn in the later Alex Kidd titles, the initial appearance of the character would swing between garb loosely resembling a traditional Mandarin tunic, or red striped jumpsuit (Sometimes overalls closer to the appearance of Mario depending on the localization). At a glance, it's easy to see that the character of Alex Kidd was inspired chiefly by Bruce Lee (evident in the jumpsuit) and Sun Wukong the Monkey King.

Initially, in the original game, he is an orphan who lives alone on Mt. Eternal, on the planet Aries (also known as "Miracle World"), where he has trained in the Shellcoretechnique. This technique enables an Arian to alter the size and toughness of their fists through sheer willpower and enables one to shatter rocks with one's bare fists.

After the disappearance of King Sander Radaxian (referred to in the manual as "King Thunder"), the planet Aries is thrown into disarray. A usurper, Janken the Great, kidnaps the next in line to the throne, Prince Igul (referred to in the manual as "Egle"), and his fiancée Princess Lora. Many of the citizens are turned to stone through Janken's magic. Alex Kidd learns from a dying man that he is, in fact, a lost member of the Radaxian Royal Family, son of King Thunder and brother of Prince Egle. Alex Kidd sets out to discover the whereabouts of his father, rescue his brother, restore the kingdom, and destroy the monstrous minions of Janken. Numerous magical artifacts and medallions are needed to be discovered to progress in the story.

During the game, Alex can collect "Baums" (the currency of Miracle World) which can then be used to purchase extra lives, items, power-ups and vehicles for Alex Kidd from shops at the start of several stages, such as the Sukopako Motorcycle and "peticopter" (a small pedal-powered helicopter).

After Alex defeats Janken The Great, the game explains how Alex restores peace to Radaxian, and that the people who were turned to stone by Janken have returned to normal. In the city, Egle is crowned King of Radaxian, and Alex Kidd, with his martial arts, takes the position of Defender of the City, although his next goal will be to find his father, King Thunder.

Sometime later, in Alex Kidd in the Enchanted Castle, Alex hears a rumor that his long lost father (referred to in this game as King Thor) is alive and well on the Planet Paperock. The Planet earned this name as it is inhabited by experts at the game "Rock, Paper, Scissors." Despite discouragement from his family, Alex travels to the Planet Paperock in hopes of finding his father.

The game for which he is best known, Alex Kidd in Miracle World, was released in 1986 and built into later versions of the Master System and the Master System II model, replacing the Snail Maze/Safari Hunt/Hang-On games of the first model. This integrated SMSII version reversed the attack and jump buttons from the earlier cartridge version to conform to that of other popular action games of the day.

Most games in the Alex Kidd series differ dramatically from one another, the sole exception being Miracle World and its direct sequel, Alex Kidd in the Enchanted Castle. While most games in the series were still platform-based, the only elements that tied the series together were the name and the title character. One game in the series, Alex Kidd: High-Tech World, was not an Alex Kidd game in Japan and was based instead on a 1980s Japanese animated series airing at the time.

After the release of Alex Kidd in Shinobi World in 1990, Sega decided to remove the Alex Kidd series in favor of Sonic the Hedgehog as their new mascot. Alex Kidd has made some minor cameos since then. 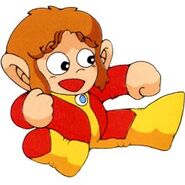