To keep his brother out of trouble

Alexander "Alex" Koval is the quadragonist of the the EverymanHYBRID YouTube horror series. He is portrayed by the actor with the same name.

Alex Koval is Jeff's younger brother. He plays bass guitar and likes indie music and his YouTube channel, WickedStickyAlex, provides an outside perspective on what is going on with the EverymanHYBRID crew, as well as chronicles his own angst as he deals with the social consequences of having a "psycho" brother. Alex first appeared in A Day in the Life, and his own channel was eventually found through the "Related Videos" bar. He seems to be one of the Rake's targets; it appeared in his closet and backyard shed. Most of his videos deal with the presence of the Rake and its affect on him and his dog, Sparky. Despite being forbidden to by his brother, Alex joined the Seven Trials of Habit, but dropped out in Trial Two along with the crew.

In the 11/26 Ustream, it was revealed that his and Jeff's parents were killed and Alex sometimes talk as they are still alive, as a self-defense mechanism, and a way of self comforting. The depth of Alex's psychosis over the deaths of his parents reached a new low in One step forward, two steps back, when it was revealed that Alex has a recording of his mother's voice saying "I don't know Al, not tonight. It's getting late. Goodnight." Alex appears to ask his "mother" for permission to do things, via talking to the voice on the tape. Jeff explained in "Glenn's Letter" that Alex had been collecting clips of family exchanges in order to use them in music tracks, and that these sound clips have become his link to his parents. 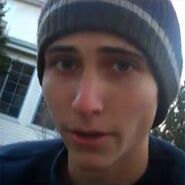 Add a photo to this gallery
Retrieved from "https://hero.fandom.com/wiki/Alex_Koval?oldid=1638303"
Community content is available under CC-BY-SA unless otherwise noted.