Help and protect his friends.

Help destroy the homunculus (both succeeded)

Major Alex Louis Armstrong is a supporting protagonist in the anime/manga series Fullmetal Alchemist. Known as the Strong Arm Alchemist, he was born into an elite family of alchemists and has mastered his family's techniques. Members of his family have, in the past, filled the highest military and political positions in the state. He acquired his alchemy titles for his skill of using arm strength in his alchemy. All though he may look intimidating, he is really friendly and (overly)affectionate, and often stays behind or risks his life for the safety of others. He also has a tendency to show off techniques passed down to him to his enemies, and make them feel somewhat awkward during a battle. The scion of the illustrious Armstrong family, Alex is a remarkably caring commander and friend as well as an invaluably skilled ally to Colonel Roy Mustang and Edward Elric.

Alex Armstrong is a remarkably large man who absolutely towers over most of the other characters in the series, making him very easy to spot in a crowd or at a distance, and has an exceptionally-sculpted and well-defined musculature honed from years of enthusiastic physical training. While his physique is usually barely hidden beneath his uniform, it seems he need only flex all his muscles at once to tear his garments to threads and leave him shirtless and bulging - a carriage he seems to generally prefer.

His complexion is rather light in comparison to other characters and, while he seems to have blond hair like the rest of his family, Alex's head is completely bald save for a single lock of curly blond hair hanging from just above his brow. His eyebrows, too, are bare of hair and he sports a thick, blond handlebar mustache, which hides his mouth while accentuating his strong, cleft chin. Though these characteristics give Alex a rather menacing visage, his eyes are blue and kind-looking with notably long eyelashes that appear to run in his family to some degree.

Despite his towering presence and intimidating physique, Alex is decidedly softhearted and almost comically emotional, quickly bursting into tears of sorrow, compassion or joy in most situations. He is a particularly caring individual, who goes out of his way to offer aid to people in need and takes great pains to look after his friends, allies and subordinates - though his great propensity for giving hugs frequently does unintentional harm to those unfortunate enough to be embraced by his powerful biceps.

With a rather boisterous demeanor, Alex appears rather fond of loud, grandstanding speeches and dramatic comments, can be unwittingly pushy in his attempts to help others and is particularly protective of youths like Edward, demanding that they eat, sleep and exercise well in order to grow healthy and strong. Proud of his own physique and believing it to be a supreme work of beauty and art, Alex frequently removes his shirt to show it off in both welcome and unwelcome attempts to buoy the spirits of those around him. He will take off his shirt on many occasions, whether it is to partake in labor, confront someone in battle, to cheer someone up, to show off and boast, or feeling extreme emotion of any kind.

As a member of the illustrious Armstrong family, Alex takes his honor very seriously and proudly wields his great strength of body and character for the military he believes exists to serve the people of Amestris. As such, he is very respectful to his superiors and an adamant protector of others on the field of battle. Alex is very seriously affected by the deaths of innocents, friends, compatriots and even enemies, freely shedding tears when faced with another human's untimely demise.

As such, Armstrong dislikes violence and, while always ready to fight, prefers to settle disputes peacefully despite the known fact that his softheartedness and unwillingness to kill have kept him from receiving a promotion in all his years of military service. Alex has also shown himself to be particularly perceptive, as he was the first to recognize that The Scarred Man was using alchemy in his serial murders and is quite skilled in delivering and deciphering surreptitious messages.

As a result of his failure during the Ishval Civil War, Alex silently carries a personal sense of shame and strives toward exemplary fulfillment of his duty in an attempt to redeem himself.

Remarkably talented in many fields, Alex excels in such eclectic practices as portraiture, tracking, cross-country running and wood-chopping, taking the time after each of these extraordinary feats to remark that his skills have been "passed down the Armstrong line for generations."

Armstrong is also a highly formidable hand-to-hand combatant, able to fight on equal grounds with such highly skilled and dangerous fighters as The Scarred Man and The Chimera Roa. Befitting his large and well-defined physique, Armstrong possesses tremendous strength and endurance bordering on superhuman, able to endure with only minor damage blunt force trauma that would render most people unconscious or crippled. His punches are able to easily plow through solid surfaces and his strength is able to nonchalantly move large and heavy objects out of the way. Despite his size, he has been noted to be deceptively fast and agile, able to dodge and maneuver against close-range attacks with surprising balance and efficiency. Armstrong's combat style resembles boxing using strong and swift punches to overwhelm an opponent and agile dodges and swift footwork to evade attacks.

Major Alex Armstrong utilizes a style of combat alchemy that has apparently been passed down the Armstrong line for generations and mixes alchemical skill with physical prowess. With the aid of two metal gauntlets strapped to his fists (both marked with transmutation circles), Armstrong transmutes objects mainly by punching them. It is possible that this method transfers the kinetic energy of his blows into the alchemical energy, enhancing the speed and force of his transmutations, since he mainly uses alchemy to rapidly produce large stone spikes, walls or other objects from the earth at a rate among the fastest in the series. Additionally, the Armstrong style allows Alex to double as a source of heavy artillery, transforming raw stone or brickwork into projectiles which are then launched with the force of his punch. With his Alchemy being combined with hand to hand combat, it is notable that Alex is the first of the few State Alchemists to survive a direct fight with Scar.

Armstrong's gauntlets both are inscribed with encircled triangles and a trio of runes. Inside the triangle appears to be the Hebrew word often associated with "God" (as described by Edward Elric in Chapter 53). Additionally, there is a ring of inscribed text around the outermost circle on each gauntlet. While difficult to make out, the text on the right gauntlet (as shown in Chapter 7) reads "Laufet, Brüder, eure Bahn, Freudig, wie ein Held zum Siegen" while the left gauntlet (whose text is made legible at the end of Chapter 58) reads "Froh, wie seine Sonnen fliegen Durch des Himmels prächt’gen Plan, Laufet, Brüder, eure Bahn, Freudig, wie ein Held". In Chapter 59, the text on the right gauntlet is shown to be identical to that of the left. It is unclear whether this is a continuity alteration or whether Armstrong had the text altered in the years since the Ishval Civil War (since chapters 58-9 take place during the flashback of Volume 15), however the latter seems likely, as in Chapter 95 - when the gauntlets are once again shown clearly - depicts them with the shortened text.

Olivier Mira Armstrong- The eldest of Alex's older sisters, Major General Armstrong is particularly hard on her only brother, especially after his humiliating failure during the Ishval War. Alex, for his part, is extremely affectionate and respectful toward Olivier, accepting her abuse with good nature and professional politeness. Though he can be afraid of her at times, such as when they fought for the title of head of the Armstrong family; it was clear he had given up, but Olivier kept beating him up. However, as the story enters its final arc, Olivier reveals that she has faith in her brother's strength and is happy to fight alongside him against their common foe.

Roy Mustang - Although not stationed under Colonel Mustang's jurisdiction, Major Armstrong can sense that the Colonel is particularly trustworthy among his superiors and eagerly offers his assistance when Mustang is in need of extra information or muscle. Mustang is the only person who Armstong has never acted goofy in front of, always maintaining a serious and polite domineer.

Edward and Alphonse Elric - Moved by their tragic story and impressed by their determination and courage, Alex has taken quite a liking to Edward and Alphonse Elric and often concerns himself personally with their safety and well-being, as when he escorted them to Resembool and when he placed them under the protection of his own subordinates in Central City. Edward frequently expresses resentment at the major's overbearing, coddling nature while Al relishes the long-lost chance to be treated like a young boy at Armstrong's hands. The Elrics have found in the Strong-Arm Alchemist a particularly trustworthy friend and the major fervently looks forward to the fulfillment of the boys' potential as well as to the return of their bodies.

Sig Curtis - The two have a large respect for each other and become close friends once seeing the other as having perfectly "manly" bodies and attitudes. The two only meet each other in major confrontations twice in the manga, but are believed to be close friends afterwards and various art depicts them flexing their muscles in the faces of many as Armstrong often does. The two are also shown to have good cooperation with each other during their battle with Sloth, beating the large and powerful homunculus with only a few blows which they perform in perfect synchronization. 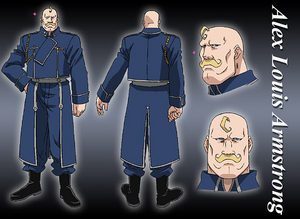 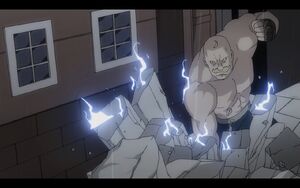 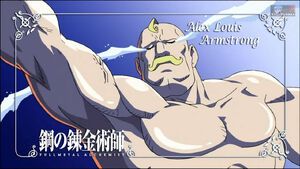 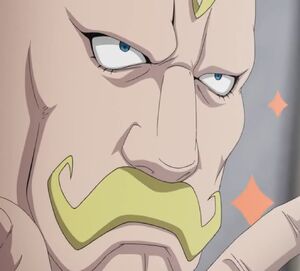 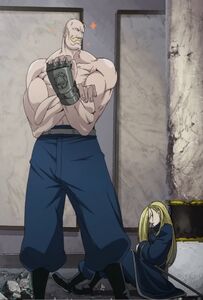 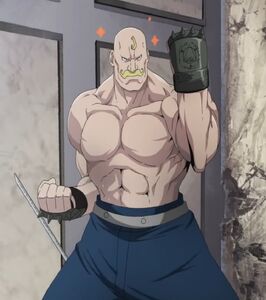 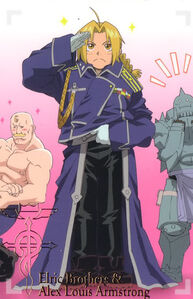