I Now Pronounce You Chuck & Larry

helping gays and lesbian to be together

To be with Chuck after realize that he's not gay (succeeded)

Official
Alex McDonough is a main character in the movie I Now Pronounce You Chuck & Larry. She is lawyer who Chuck falls in love with.

She wasn't seen until Chuck and Larry pretend to be gay for Larry's future and they met her who's their lawyer and Chuck was in love for the first time even though he was womanizing at the beginning.

So, after they talk to Alex, Alex suggests that they get married and move in together to prove that they are committed; Chuck reluctantly agrees. The pair travel to Canada for a quick marriage and begin living together.

At a gay benefit costume party, the partygoers are confronted by homophobic protesters. Chuck is provoked into punching their leader, and the incident is picked up by the local news.

With their apparent homosexuality and marriage revealed, Chuck and Larry are heckled, and their fellow FDNY firefighters refuse to work with them. Their only ally is Fred G. Duncan, an angry, intimidating firefighter who comes out to Chuck.

Chuck becomes romantically interested in Alex after the two spend time together, but finds himself unable to get close to her because she thinks that he's gay.

Meanwhile, when city agent Clinton Fitzer arrives to investigate the couple, and the strain on both Larry and Chuck causes them to fight. A petition circulates to have Chuck and Larry thrown out of the firehouse.

Upon discovering it, Larry confronts the crew about personal embarrassments on the job that Chuck and Larry helped them overcome. Afterwards, Chuck and Larry reconcile their differences.

Chuck and Alex's relationship grows as they spend time together. They soon kiss, but Alex, still believing Chuck is gay and married, is shocked and immediately distances herself from Chuck, who is unable to explain the situation to her.

Larry learns about the kiss and confronts Chuck about it, asserting that Chuck's absence is jeopardizing their ability to maintain the ruse of their relationship.

During the argument, Larry reveals that he is still in love with his deceased wife, Paula, and Chuck responds that he needs to move on for the sake of his children. Larry and Chuck then reconcile again.

Eventually, numerous women publicly testify to having slept with Chuck in the recent past, and the couple is called into court to defend their marriage against charges of fraud.

They are defended by Alex, and their fellow firefighters arrive in support, having realized all that Chuck and Larry have done for them over the years.

Fitzer interrogates both men, and eventually demands the pair to kiss to prove that their relationship is physical.

Before they do so, Chuck and Larry are interrupted by FDNY Captain Phineas J. Tucker, who reveals their marriage to be a sham and that they are both straight.

He then offers to be arrested as well since he knew about the false relationship but failed to report it.

This prompts each of the other firefighters to claim a role in the wedding in a show of solidarity. Chuck, Larry and the other firefighters are sent to jail, but they are quickly released after negotiating a deal to provide photos for an AIDS research benefit calendar, and Chuck and Larry keep their benefits.

Two months later, Duncan and Alex's brother, Kevin, are married in Canada at the same chapel as Chuck and Larry. At the wedding party, Larry moves on from the death of his wife and talks to a new woman while Alex agrees to a dance with Chuck. 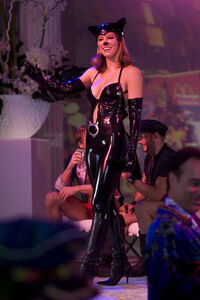 Alex in her catwoman costume 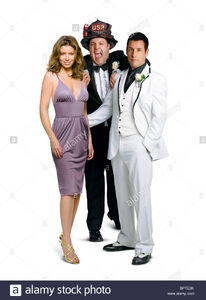 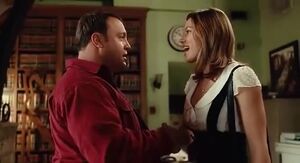 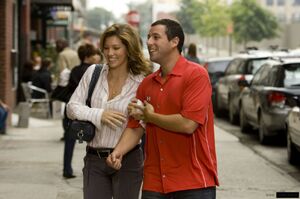 Add a photo to this gallery
Retrieved from "https://hero.fandom.com/wiki/Alex_McDonough?oldid=1720207"
Community content is available under CC-BY-SA unless otherwise noted.