Bioterrorist
Creator and leader of the Evolved

Prototype:
Remember who he is.
Gain new powers.
Save New York City from the infection (all succeeded).
Prototype 2:
Spread the infection beyond New York Zero (succeeded until his death).
Get rid of Gentek and Blackwatch (succeeded).
Kill James Heller (failed).

Initially being an anti-heroic protagonist who gained his powers from an experimental bioweapon after he died as a human, after he lost his faith in humanity, he then wants to spread the infection beyond New York Zero and become the main antagonist of the second game and the arch-enemy of the protagonist, James Heller, who seeks to kill Mercer for being the cause of his infection and the death of his wife and daughter.

He was voiced by Barry Pepper in the first game, who also portrays Daniel Jackson in Saving Private Ryan, John F. Kennedy in The Kennedys, Jay Fuller in The Lone Ranger, Vince in Maze Runner: The Scorch Trials and Maze Runner: The Death Cure, Rick Lovick in Monster Trucks, David Keller in Crawl and Dunn in Call of Duty: Modern Warfare 2, and later by Darryl Kurylo in the second game.

Once a human, Alex works for a company known as Gentek. He has no empathy, as evidenced when he is questioned of how does he feel of creating a deadly virus to be 10x deadlier, he replies that he "wasn't paid to feel".

One day, he is pursued by Blackwatch, a military unit and took a vial of the virus as "insurance". Alex is cornered by the team at Penn Station. As a result, he drops the vial to the ground, hoping to release the virus and put Blackwatch and Gentek in an untenable situation. He is shot to death afterward.

His body is shown being brought to Gentek for dissection. The virus, having merged with his body, became an independent being based on Alex, codenamed Zeus. Zeus woke up, having no memory of how did he end up there, and tries to escape. Just then, Blackwatch corners him and shot him, but he survives.

Alex gets into contact with his younger sister, Dana Mercer, into helping him discover the truth. She even directed him to Karen Parker, his ex-girlfriend, to create a cure for the virus. However, the latter is possibly forced to work for Blackwatch as the genetic material he got for her is used to make a weapon against him. This is removed from him with help from Dr. Bradley Ragland.

Just then, Dana gets kidnapped by a Leader Hunter under orders of Elizabeth Greene. Alex has managed to locate her, and gets into a fight, but ended up creating the Supreme Hunter when he injected her with the same weapon. He saves Dana, nevertheless.

Next, Alex gets into contact with a mysterious informer, who knows everything about him. He reveals that he is the virus and that Alex is just his role.

The contact leads him into a confrontation with Director Raymond McMullen, his ex-boss at Gentek, to get information. The latter reveals how Alex Mercer is responsible for the plague by unleashing the virus in New York before having died at Penn Station.

Alex finally meets the contact, Captain Robert Cross, the specialist he fought early on. He reveals information on getting Colonel Taggert as a ticket to get into the Reagan to stop General Peter Randall from destroying Manhattan with a nuclear missile. When they got there, Alex absorbs Randall and gets attacked by Cross, who is revealed to be the Supreme Hunter in disguise.

Alex defeats the monster and puts the missile into the river. He fails to escape as the explosion takes him, too. However, his remains absorbed a crow, regenerating himself.

Alex has witnessed a soldier named James Heller taking down the infected. What he didn't know is that he does that only to die fighting them.

When Heller becomes wounded, Alex infected him with the Blacklight Virus, giving him the powers he would have. This leads him to have a vendetta for Alex as he knows he is responsible for the death of his wife and daughter.

The original Alex was a cold monster with no empathy who ultimately unleashed the virus out of pure spite. His actions and demeanor are likely due to his troubled past, which made him a cold individual, both paranoid and sociopathic. On top of that, he seemingly doesn't care about his younger sister, Dana, and is seemingly only using her as a pawn in his plans as well. He rarely takes human cost into account during his actions, being able to murder scores of humans without remorse or hesitation.

But in truth, however, Alex is not completely heartless as he seemed; actually, he deeply trusts and cares for his younger sister Dana, having been the only real paternal figure for her, and had what can be assumed to be a loving relationship with Karen Parker.

The virus creation that merged with him, Zeus, was ultimately a better creature, displaying acts of genuine heroism and was horrified and disgusted with the original's actions. Even he is seemingly more caring to Dana after infected by the Blacklight virus, as she is the only one who can help him to uncover his past. However, his change is likely because, in truth, he is already dead when infected; His lifeless body was resurrected, taken over, and possessed by a virus that he unleashed and immediately took control of his mind, something which explains his amnesia upon his return. In addition, before being merged into Zeus during his death, Alex was a contrast of what he becomes now. He was positive, and full of life and often played games with his sister Dana despite his troubled past, showing a close bond between the two. However, when Dana betrays Alex at the end of the game, she says "the Alex I knew died a long time ago" Alex was hurt, but then said, "I'm beyond life and death".

Unfortunately, after repeated betrayals and mishaps during his time away from NYZ after the initial outbreak, Alex decided that stopping the outbreak was a mistake and started a new one himself to usher in a new race; he claimed he was making a better world by doing so. In his new role as the leader of the Infected, Alex pursued his goal of spreading the virus in a far more active and aggressive manner than Elizabeth Greene ever did, even inserting spies within both Blackwatch and Gentek and using their resources and scientists to do so.

Once reanimated by the Blacklight virus, every particle of Mercer's form, including his clothing and equipment, becomes comprised entirely of viral biomass. This substance can be manipulated at will. He can absorb the organic matter of other living creatures, converting it into more biomass. This process sustains and regenerates Mercer's health and is referred to as 'consuming'. In addition, Mercer can consume individuals, absorbing their knowledge, skills, and even their physical form, which he can call upon at will. He can manipulate his physical form to create weapons to attack his enemies, generate armor to defend himself, and take on the appearance of another person to disguise himself. 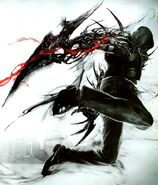