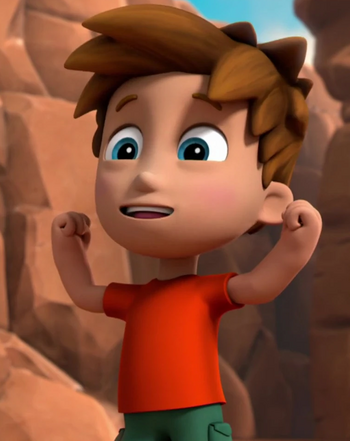 Alex Porter is a young boy who lives in Adventure Bay. He is Mr. Porter's grandson.

Alex is a young boy predicted to be five or six years old. Due to his age, Alex does not listen or pay attention that much as he is described as impatient. Alex loves school as seen in "Pups Save a School Day". Alex tries to form his own unprofessional rescue team in "Pups Save Alex's Mini-Patrol" because he cannot join the PAW Patrol himself. It consists of himself, Cali, Chickaletta, Little Hootie, Star, and a bunny. It later reappears in "Pups Save the Crows" and "Pups Save an Out of Control Mini Patrol". In "Pups Save Midnight at the Museum", Alex's Mini-Patrol gains a new member, a mouse named Squeak.

Due to his age, Alex is very rambunctious and impatient. Like Marshall, he can sometimes be clumsy because of his recklessness. It is shown in "Pups Pit Crew" and several other episodes that he idolizes the PAW Patrol and wants to be like Ryder, so he builds his own super-trike. Despite his lack of impulse control, Alex has good intentions and has been shown to be helpful in the community, even though his attempts to help can cause problems. He also recognizes his wrongdoings and apologizes for them. In "Ultimate Rescue: Pups Save the Movie Monster", Alex makes a brief cameo as the clapboard handler for a town film. It can be inferred that Alex's hobbies include flying kites and visiting the bay, since he is seen among the kids at the beach in "Sea Patrol: Pups Save the Pier" and "Sea Patrol: Pups Save a Shark".