Alex Wilde is a supporting character in Savage Dragon. She is a police officer and one one of Dragon's lovers.

Alex Wilde's orgins show that she was brought from New Mexico in Chicago by her mother after her father's death. They were among the gathering of illegal immigrants that were targeted by the police. Darren Wilde was apart of the raid and upon seeing Alex's mother he instally fell in love with her and they went on to become a couple and got married. Despite a full brief of happiness Alex's mother was killed by a car in front of her. Alex was later raised by her step-father and they had since had a close bond.She then joined the police adacamy hoping to become a police offer to strength her bond with her step-dad but he was killed in the line of duty. At some point she met the Dragon and the two since became close friends and parnters. Alex had since fought alongside the Dragon against the Vicious Circle and many other supervillains in their long history together the two even became lovers at some point. The two broke up as their friends with benifts relationsihp when they realizse that Alex wanted to be more than friends and Dragon couldn't. Alex then went on to have more adventures with the dragon family when Emperor Kurr Dragon's orginal identy took control and then witness Dragon's final end for good as Malcolm grows up to take his father's place.

Alex Wilde appears in the Savage Dragon carton series voiced by Kate Scoicue in this she is Dragon parnter in crime aiding him against super criminals. 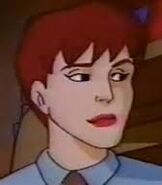 Alex in the animated series
Add a photo to this gallery
Retrieved from "https://hero.fandom.com/wiki/Alex_Wilde?oldid=1612416"
Community content is available under CC-BY-SA unless otherwise noted.