Alex Wilder is a fictional character in the Marvel Comics series Runaways. He was created by author Brian K. Vaughan & artist Adrian Alphona. In the Marvel Cinematic Universe's Hulu tv series, he is portrayed by Rhenzy Feliz.

He debuted in Runaways vol. 1 #1 with most of the other main characters. Like every member of the original Runaways, he is the son of evil villains with special abilities; in Alex's case, gang mob bosses. Alex is the team's de facto leader in the title's first volume, temporarily ranking Alex among the list of African-American superhero team leaders.

Unlike the rest of the team, Alex does not possess powers of any kind but is a child prodigy in the fields of logic and strategy, both of which assist Alex greatly during his time as leader. Thin, black, and with a signature afro, Alex outed himself as the Runaway's secret mole to their evil parents, and met his tragic demise after being blown into ashes by the Gibborim. 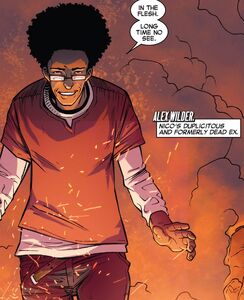 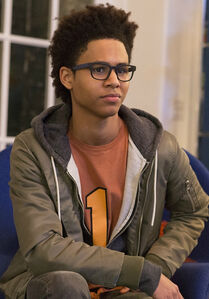 Alex in the MCU tv series.