Fusion of Pearl and Amethyst and Garnet

All of the Crystal Gems weapons fused together

Alexandrite is the fusion of Garnet (and, by extension, Ruby and Sapphire), Amethyst, and Pearl.

She debuted in the Steven Universe episode, Fusion Cuisine and is voiced by Rita Rani Ahuja. In the Japanese dub from the series, she is voiced by Yurika Hino.

Alexandrite is a massive fusion with bright-magenta skin and six arms. Her eyes are covered by a dark-indigo visor. Instead of a third eye, like Garnet has, she has an alexandrite gem, representing the location of Pearl's gem, with three dark- indigo oval-shaped lenses surrounding it. Alexandrite's primary face functions as a mask, covering a second, monstrous-looking mouth beneath it.

Alexandrite's attire is a combination of the Crystal Gems's clothing: The teal leggings with a four-pointed star cutout on each knee resemble Amethyst's, the flats and large, dark-mauve shoulder plates resemble Garnet's, and the dark pink belt resembles Pearl's. The gloves on each pair of arms are the skin tone of her three constituent Gems (Violet for Amethyst, magenta for Garnet, and aqua for Pearl).

During "Fusion Cuisine" she is not shown to have her own personality (Though she has her own voice.), but rather three separate personalities, each one being that of Garnet, Amethyst, and Pearl. These personalities can exist at the same time and come into conflict with each other causing Alexandrite to defuse.

After an inappropriate phone conversation between Dr. Maheswaran and Garnet (who pretends to be Steven's mom), Connie's parents wish to meet Steven's parents for dinner. While Steven has a dad, he has three "moms" and he doesn't wish to leave any of them out.

Steven comes up with the idea of fusing the other three Crystal Gems into one Gem that can represent his mom in his nuclear family. After some initial hesitation, they agree to go through with it. Fused together as the enormous Alexandrite, the Gems stomp to their dinner, where the Maheswarans are impatiently waiting. Greg and Steven have trouble fabricating answers to all of the Maheswarans's questions. Once the food is served, Alexandrite has an internal struggle between the Gems to eat or not eat. They fall out of sync and defuse, surprising Connie's parents.

Alexandrite then shows up for a final time when the Gems fuse off-screen in order to track down the runaway Steven and Connie. She is last seen chasing down and picking up the bus the two were riding out of Beach City.

Alexandrite has incredible amounts of physical strength and stamina; her long legs allows her to cover a lot of ground quickly. She uses her sheer strength and size to lift weighted objects, like a bus. Garnet describes her as "an incredible force on the battlefield", making clear Alexandrite is indeed a formidable warrior, capable of anything as long she keeps a singular goal in mind.

Alexandrite can use of all of the weapons the fusers. These include Pearl's spear, Amethyst's whip, Garnet's gauntlets, Opal's longbow, Sugilite's flail, and Sardonyx's war hammer. She can even transform one weapon to the next, as seen in "Super Watermelon Island" where she transformed Sugilite's flail into Sardonyx's hammer.

In addition, Alexandrite can breathe fire from her lower mouth. These flames can disrupt water, even when in Lapis Lazuli (or Malachite's) control. 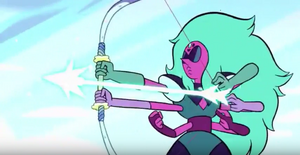 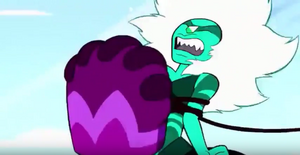 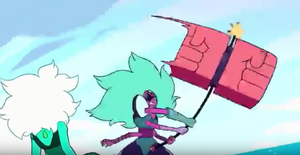