Valet and butler for the Wayne family, legal guardian of Bruce Wayne following the deaths of Bruce's parents

Guiding Bruce toward his eventual career as Batman

Alfred Pennyworth is a character in the TV series Gotham, portrayed by Sean Pertwee. He is the butler of Bruce Wayne. A former member of the British Special Air Service and the Royal Marines, Alfred became the legal guardian of Bruce after the murder of Thomas and Martha Wayne.

Alfred is generally polite and respectful, although there are multiple instances where his military background causes him to lash out and lose his temper. He has admitted that he is unsure about how to raise Bruce following the death of the latter's parents. However, he is genuinely concerned for Bruce's well-being and is loyal to his young charge above anything else. 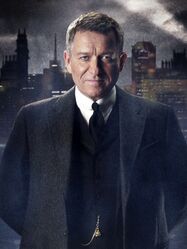 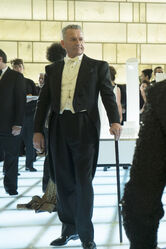 Add a photo to this gallery
Retrieved from "https://hero.fandom.com/wiki/Alfred_Pennyworth_(Gotham)?oldid=1838125"
Community content is available under CC-BY-SA unless otherwise noted.