Butler of the Wayne Family (formerly)

Stop the Joker from descending Gotham into chaos (succeeded).
Persuade Bruce to stop his crusade, even if it means leaving him (failed).
Help Bruce and Selina Kyle get a new life (succeeded).

He is portrayed by Michael Caine, who also portrayed Nigel Powers in Austin Powers, Finn McMissile in Cars 2 and Lord Redbrick in Gnomeo & Juliet.

After the deaths of Thomas and Martha Wayne, murdered at the hands of Joe Chill, Alfred became Bruce Wayne's legal guardian. When Bruce vanished, he was declared dead by Wayne Enterprises' CEO William Earle, and left everything to Alfred. Seven years later, after training with the League of Shadows, Bruce reunites with Alfred and told him of his goal of becoming a symbol to frighten the criminals of Gotham City. With Alfred's help, Bruce had gathered the tools necessary to become Batman, also encouraging him to feign a social life to deflect attention from the idea that he could be Batman. When the League of Shadows attacked Wayne Manor, Alfred saved Bruce, who was trapped under a beam and rallied him to resume his fight to save Gotham from Ra's al Ghul.

For the next year, Alfred acted as a source of wisdom to not only Bruce, but Rachel Dawes and, on a more casual level, Harvey Dent. While reflecting on the actions of the Joker, Alfred recalls a tale in order to explain to Bruce that some men "just want to watch the world burn". Rachel later gave Alfred the task of giving Bruce a letter, which reveals that she was going to marry Dent. Alfred later burns the letter, reflecting that, just as the people of Gotham would need to believe in Harvey Dent, despite his actions as Harvey "Two-Face", Bruce needed to believe that Rachel still loved him.

Eight years after the death of Harvey Dent, Alfred had grown concerned for Bruce, who had not yet moved on from either Rachel or Batman. Despite this, Alfred assisted Bruce in finding out information about the mercenary, Bane. However, the two became separated when Alfred told Bruce the truth about Rachel; angry and hurt, Bruce orders Alfred to leave. Alfred only returned after Batman apparently sacrificed himself to save Gotham, and attended Bruce's funeral with James Gordon, Lucius Fox and John Blake. Bruce left his entire estate to Alfred. However, Alfred returns to a restaurant in Florence, where he visited before Bruce returned from his seven-year absence as Batman, hoping that he would see Bruce there, settled down and happy. And in his next visit to the restaurant, Alfred looked across to see Bruce dining with Selina Kyle. They exchange knowing smiles and go their separate ways. 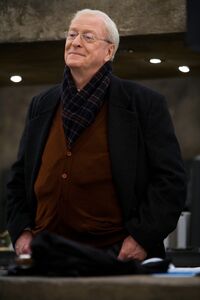 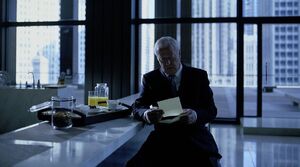