Alia (エイリア Eiria?, lit. "Aeria") is a character of the Mega Man X series. She works as an Operator, Navigator, and Computer Specialist of the Maverick Hunters and first appeared in Mega Man X5. She briefs X, Zero, Axl and other Hunters about their missions and guides them through the areas, giving information about the objectives, recent developments, and spotted Mavericks. She also manages the transfer actions at Hunter Base. In Mega Man X8, she can be unlocked as a secret playable character, like her two Navigator comrades, Layer and Pallette, imitating the style and moves of X, though she is limited by the fact that she cannot use Armor parts. Before working for the Hunters, Alia was part of a team of Reploid Research scientists and was close to her colleague, Gate. 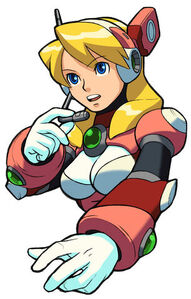 Retrieved from "https://hero.fandom.com/wiki/Alia?oldid=1633635"
Community content is available under CC-BY-SA unless otherwise noted.